NFL News and Rumors
The struggling Philadelphia Eagles will look to take down the ‘lukewarm’ Detroit Lions when the NFC playoff hopefuls square off in a Week 12 Thanksgiving Day matchup that could effectively end one of these teams’ faint playoff hopes.Now, let’s find out which one of these teams will bring home the turkey for NFL betting aficionados that are hungry to boost the annual bankroll on Thanksgiving Day!

The Lions have only managed to score an identical 18 points in each of their last two games, but it was enough to record consecutive wins, including their hard-fought 18-13 win over Oakland on Sunday while cashing in as a 2-point home dog in the process.Enigmatic quarterback Matthew Stafford put the Lions on top for good when he ran for a go-ahead 5-yard touchdown early in the fourth quarter on a day when he escaped the pocket several times for positive gains.“He had some timely runs,” Lions coach Jim Caldwell said. “And, that was a good decision on the touchdown because he had a couple other options there. I think teams underestimate how quick he is.”Stafford also completed 22 of 35 passes for 282 yards though he failed to throw a touchdown in the win.“I just call him Sweet Feet,” Lions running back Theo Riddick joked. “He’s not the fastest guy, he’s not the quickest, but he makes plays.”The Lions won consecutive games for the first time this season and kept Raiders gifted young quarterback Derek Carr and Oakland’s dangerous offense, largely in check by limiting Carr to 13-for-25 passing for 169 yards and no touchdowns. The Lions also limited Oakland to just 50 rushing yards in the win. Detroit is ranked 29th in scoring (18.5 ppg) and an identical 29th in points allowed (27.4 ppg) 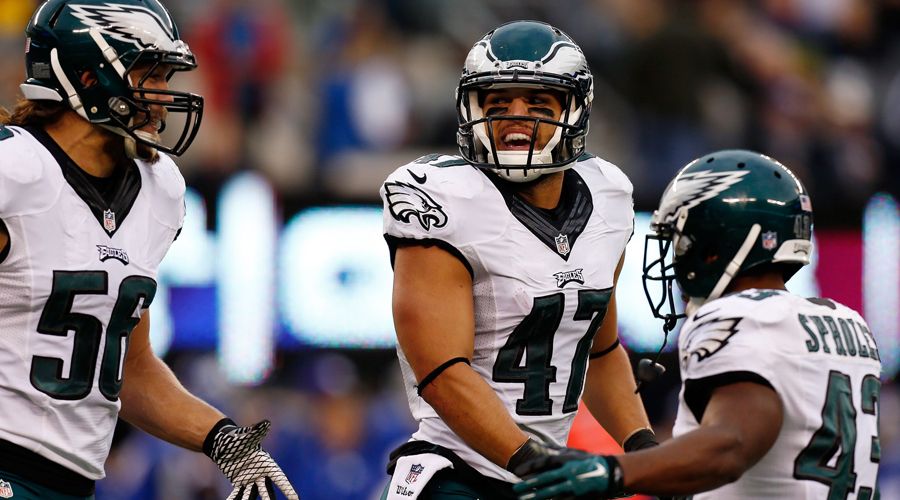 The Eagles have lost two straight and three of its last five games, including a 45-17 smackdown as a 6.5-point home favorite at the hands of Tampa Bay on Sunday that I predicted last week.Veteran quarterback Mark Sanchez completed 26 of 41 passes for 261 yards and two touchdowns, but the former Jets starter also tossed three costly interceptions (what else is new?) that canceled out all of the positive things he did and then some.Not only did the Eagles turn the ball over four times, but they also made Buccaneers rookie quarterback Jameis Winston and veteran running back Doug Martin look like the second comings of John Elway and Barry Sanders in the resounding loss. Winston tied an NFL rookie record against his favorite childhood team by tossing with five touchdown passes, and Martin rushed for a whopping 235 yards on 27 carries.“We are watching a young quarterback grow before our eyes,” Buccaneers receiver Mike Evans said.Despite the loss, Philly is just one game behind the division-leading Giants in the mediocre NFC East.“We didn’t play well in any facet of the game and there’s no excuse for that,” said Kelly, whose team has a short week and plays Thanksgiving Day at Detroit.Sunday’s performance marked the ninth time in his career that Sanchez has tossed at least three interceptions in a game.“A game like this will shake your confidence and that’s our biggest enemy because it can destroy you,” Eagles defensive coordinator Bill Davis said.The Eagles are ranked 15th in scoring (22.9 ppg) and 17th in points allowed (22.9 ppg).

One of the reasons that I picked Tampa Bay to upset Philly last weekend was because I just can’t bring myself to back any team that has Mark Sanchez as its starting quarterback.Having said that let me also say that I am going against the Birds again this weekend for the exact same reason. If Mark Sanchez suits up for the Birds (he will) Philly loses again!I like the way the Lions have played in winning each of their last two games and I believe Detroit is going to show up with another A-plus effort in order to get the win over the beleaguered Birds.I say forget the fact that the Lions are just 3-7 ATS in their last 10 games against their NFC counterparts and 4-10 ATS in their last 14 games overall. Philly hasn’t been much better in going 4-16-1 ATS in their last 21 games after allowing more than 350 total yards in their previous game and a winless 0-7 ATS in their last seven games following a double-digit home loss.The bottom line for me is that Detroit is playing well while Philadelphia is not. The Lions are at home on Thanksgiving Day and I believe they are going to cook the Eagles like a big ‘ol Thanksgiving Day Turkey and 69 percent of the betting public agrees!