NFL News and Rumors
I’m always slightly dubious about placing early wagers in the NFL lines when I haven’t assessed team lineups and injuries, but when the NFL odds are as favorable they are ahead of Week 16’s games, I highly recommend jumping on the hot betting lines as fast as possible. Plus, looking at Week 15’s injury list, there’s no doubt that we’ve had worse weeks this season, so bettors shouldn’t be too worried about how the banged-up players will affect the lines. That being said, here is an early look at the online NFL Week 16 odds, lines and point spreads.

An Early look at NFL Odds and Spreads for Week 16

Raiders vs Chargers, A Game For Pride and Good Riddance

The Oakland Raiders (6-8) host the San Diego Chargers (4-10) on Thursday Night Football in a game that will kick-start the week, though with both teams already out of the divisional title and playoff contention, they’ll probably not have much to play for, except their pride. Even so, the Chargers are coming off a big home victory over Miami on Sunday, winning 30-14, so they should be able to keep things close and interesting against Derek Carr and the Raiders, who’ve been favored to win in the early lines by 6 points.

Could This Be The Game That Squares Washington’s Playoff Odds

On December 26th, we’ll be having a rare Saturday NFL game between divisional rivals Washington and Philadelphia, who are both in the running for the NFC East title. With both Dallas (4-10) and Philadelphia (6-8) suffering defeats in Week 15, the 7-7 Redskins (who beat Buffalo on Sunday) have a solid chance of extending their one-game lead atop the division. Given the streaking Redskins have won their last two meetings with the Eagles (including the 23-20 win over Philly in Washington earlier this season), and Philadelphia hasn’t been as solid at home this year (3-4 in 7 home games), don’t be too surprised if Kirk Cousins continues his surging form to give Washington a much-needed upset win over the home-favored Eagles. Sunday’s NFL slate will expectedly be the most packed one. The Lions and 49ers will start the 1 PM slate in a meaningless game, just like the virtually inconsequential Bears vs. Buccaneers and Bills vs. Cowboys matchups that are also scheduled for the same time.

Texans vs Titans, AFC South Title On The Horizon For Houston

It’s however not all empty at 1 PM, as we have enticing and crucial showdowns, including Houston vs. Tennessee, Carolina vs. Atlanta, and Cleveland vs. Kansas City. The Texans, who handed Indy a loss in Week 15 to take a one-game lead atop the AFC South, need to beat Tennessee to maintain their lead and keep their title-winning hopes alive. Houston’s QB T.J. Yates left Sunday’s game with a torn ACL, but Brandon Weeden showed enough poise to lead Houston to the win. This should motivate the Texans for a rather easy win and cover on Saturday against the Titans that will probably be without starting rookie QB Marcus Mariota, who also got injured on Sunday and is questionable for Week 16.

Will The Panthers Make it 15-0 on Sunday

The most interesting game of the 1 PM schedule will probably be the matchup between the undefeated 14-0 Carolina Panthers and the 7-7 Atlanta Falcons. Atlanta finally ended its losing skid by capitalizing on Jacksonville’s mistakes to claim a crucial 23-17 road win on Sunday. But after Carolina shut out Atlanta 38-0 two weeks ago, and then followed it with a thrilling 38-35 road victory over the Giants on Sunday, beating the Falcons and covering the 6.5-point opening spread of this game should be a walk in the park for Cam Newton and Company. Meanwhile, Cleveland’s season has been over for a while now, so it doesn’t look like the Browns will be posing much of a challenge to the Kansas City Chiefs that are streaking on a league-best eight winning streak. Still, with Kansas City favored by as many as 12 points in most sportsbooks, I like the Browns for the points, especially if that spread number goes up. I mean, Johnny Manziel is yet to find his groove, but K-City’s defense is not as tough as the one Cleveland faced in Seattle on Sunday. The Browns should thus be good for more than the 13 and total of 230 offensive yards posted against the Seahawks. And while we are still on scores, lookout for both teams combining for around 50-or-more points in a great high-score duel. Immediately after the 1 PM games, NFL betting enthusiasts will be treated to the Jaguars vs. Saints clash, followed by pair of mouthwatering 4:25 PM games, with the Seahawks hosting the Rams in one encounter, and the Cardinals playing hosts to the Packers in the other fixture. 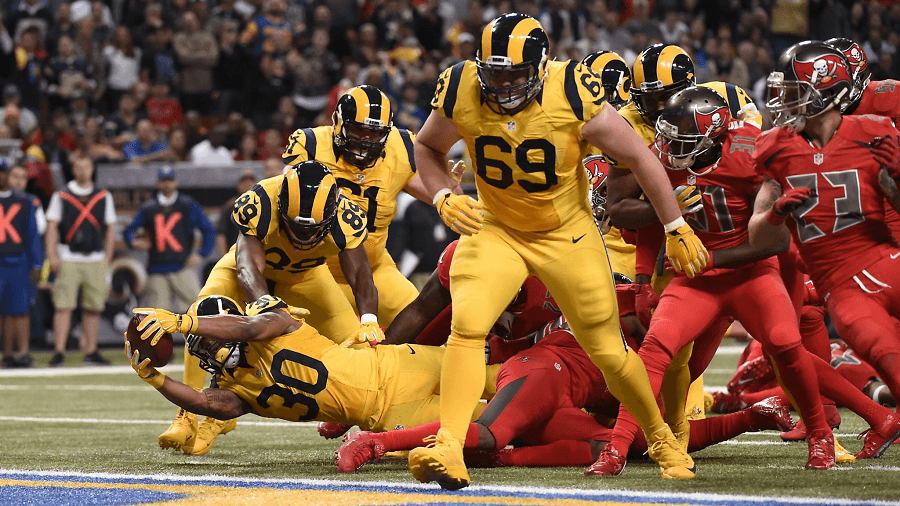 Will St Louis Get Rammed By The Seahawks

The Rams kept their hopes of finishing the season on a .500 mark with a 31-23 win over Tampa Bay on Thursday, while the Seahawks successfully clinched a playoff berth after a win over the Browns on Sunday. With the momentum on the side of high-flying ‘Hawks who’ve won their last five straight games, the motivated hosts look like a great SU winning pick over visiting Rams that are 1-4 SU and 1-3-1 ATS in their last five road games. Nonetheless, I’d be a bit wary of trading on the Seahawks on the spread as 14-point favorites. Yes, Seattle is appealingly 5-2 SU and 4-3 ATS at home this season, but this is a NFC divisional rivalry game that is bound to come with a lot of fireworks from both teams. In addition, St. Louis backup QB Case Keenum is coming off one of the best games of his professional career, completing 14 of his 17 passes for a season-high of 234 yards with two touchdowns and no interceptions against Tampa Bay, so he could be up for another good display to keep Seattle fairly contained. This should especially be possible if Rams star RB Todd Gurley can show up strongly with his big-game running show.

And for your game of the day, Aaron Rodgers and the surging Packers will go against the red-hot Carson Palmer and the Cardinals. Both teams have already punched in their postseason tickets, but Green Bay needs to continue winning in order to win NFC North title. The motivation of wanting to claim the divisional title is guaranteed to see the Packers come out with guns blazing, but the Cards are doing nearly everything better than the Packers right now, meaning the visiting Green Bay team will be hard-done in its quest for a win. Palmer is playing in a whole other galaxy right now than Rodgers, Arizona is running the ball better than Green Bay, and the Cards’ defense is far-much superior than Green Bay’s. With that, I expect to halt Green Bay’s three-game winning streak by claiming a franchise-record 13th regular season win.

Come Sunday Night Giants and Vikings Square Off In The Cold

For primetime Sunday Night Football lovers, the Giants will be traveling to Minnesota to faceoff the Vikings. The Giants are trending in the NFL right now, for the wrong reasons though, after suffering ANOTHER disheartening loss for the umpteenth time on Sunday vs. the Panthers. Star Giants wide receiver OBJ, who lost his cool against Panthers CB Josh Norman and clashed multiple times in the losing effort, is highly likely to be suspended, so expect the New Yorkers not to have their offensive fluency against the Vikings. Meanwhile, Minnesota’s QB Teddy Bridgewater didn’t need much help from Adrian Peterson on Sunday, ripping apart the Bears single-handedly by passing for four TDs and rushing for another score in a vintage career-day display. If you still love the Giants for the win here, well and good for you. For me, I’ve lost enough money by trusting on Eli Manning’s hands, and I won’t be making that mistake this week, or even in the near future. Simply put, expect me to pound so effing hard against him and the Giants.

Monday Night Football, A Couple Of QB’s With A Great Future Go Head to Head

And that brings us to the last game of the week, a clash between two promising backup QBs that are likely to be starters a year or two from now. Cincinnati’s A.J. McCarron did a lot of good on Sunday, leading the Bengals to an important playoff-clinching win over the Niners. Denver’s Brock Osweiler continued his fine play under the center, posting the best half of his career (214 passing yards and four total touchdowns) in the first two quarters of the game against the Steelers, but suffered a shoulder injury that saw him ejected out of the game. This allowed the Steelers to find their way back into the game, and by the time Osweiler came back in the third quarter, he wasn’t able to offer much to stop Pittsburgh’s comeback. Nonetheless, Osweiler should have enough resting time until Monday’s game, giving him a solid chance to play at full strength against McCarron in an enticing game. If you ask me, I’d say this game showdown has all the hallmarks of a shootout affair that will most likely end in favor of the Broncos, thanks to Denver’s superior defense. But then again, this I’ve been known to be wrong every once in a while, so you’d be better off making your independent choices.
Older post
Newer post