NFL News and Rumors
If NFL odds fans watched Peyton Manning’s painful play this past week against Kansas City, then they know that it’s likely that his career has come to an end. He’s been slowly getting less and less effective for about a year and a half, and this past Sunday saw him throw four interceptions against the Chiefs before coach Gary Kubiak mercifully pulled him in favor of Brock Osweiler. Because of Manning’s torn plantar fascia, Osweiler will start this coming week…and may keep starting after that.

Peyton has a chance to bow out with grace, and he should take it, @SI_DougFarrar writes https://t.co/LIddybBXjnpic.twitter.com/2PQk345KpT

How bad was Sunday’s outing? Manning only had five completions to teammates – just one more than the number of picks that he threw. However, he had several other passes that could easily have been picked off. If you look at adjusted yards per attempt (which takes away 45 yards per interception), that game was one of the five most awful since 1978 for quarterbacks with a minimum of 15 attempts. But you can’t just look at Manning’s work this past week if you want to see him trending down. In the past year or so, we’ve seen him play awful football in a playoff game, scuffle in his worst Week 1 ever, an unsightly number of interceptions and now his worst game ever. It might be that he can have a decent start again, but it doesn’t look like it. He also has an injured rib to along with that tear, but plantar fasciitis takes a long time to heal. Remember that he is 39 years old and was already showing some signs of decline when he wasn’t injured. 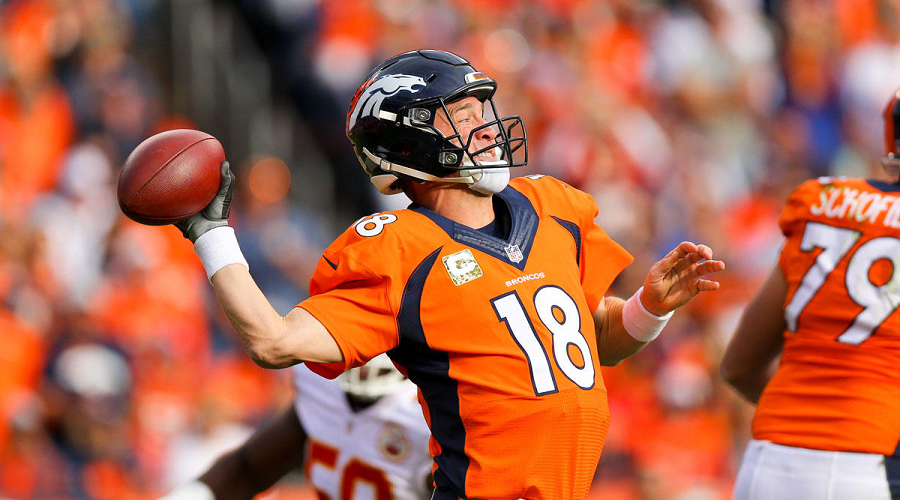 Through nine complete games, Manning has thrown nine touchdown passes…and 16 picks. It’s kind of like Brett Favre’s 2010 campaign? 10 scores and 16 picks after nine games. Denver is still 7-2, but that’s been thanks to a strong running game and an ironclad defense. However, the running game vanished after the Green Bay win, and the defense was hideous against the Chiefs. So who will Brock Osweiler be making his starting debut against? That’s right, the visiting New England Patriots. There was a time when the Patriots had this marked as one of their tough games, but there’s no reason to expect that Osweiler will be able to keep things even decent against the Patriots. It will be ironic if a team that started undefeated almost through the entire first half of the season will now collapse and lose almost as many games going down the stretch. You might suggest that the Broncos give Manning the off-season to recover and return to full form next fall. The problem with that idea is that there is no guarantee that he will return effectively from these injuries. Quarterback is a mental position in this game, and if he has lost his confidence at all, there will be no reason to giving him the keys to a team’s offense this fall. It will be time for him to look in the front office or elsewhere in the organization.
Older post
Newer post