NFL News and Rumors
The New York Jets are in control of their own playoff destiny as they get set to visit the Buffalo Bills for their enormous Week 17 AFC East divisional NFL betting clash.If the Jets win…they’re in. If they lose, they’ll need some help to reach the postseason. With Buffalo’s 2015 campaign coming to an end after this contest, let’s find out if the Bills can play spoiler to pull off the upset when this game gets underway live from Ralph Wilson Stadium in Orchard Park, New York on Sunday, January 3 at 1:00 PM ET.

Bill Polian says he sees no formal role in his future with the Bills. Full comments: https://t.co/qdS1ITiVJS pic.twitter.com/mj6Mr8ZTX1

Buffalo Bills at NY JetsWhen: 1:00 PM ET, Sunday, January 3, 2016Where: Ralph Wilson Stadium, Orchard Park, New YorkNFL Odds: Jets -3O/U: 43Watch Online HereThe NFL week 17 odds for this contest have the visiting Jets as 4-point favorites to beat the Bills. If you want to bet the O/U the game total is sitting at 43 points. The Moneyline has both teams OFF the board.

Why Bet The Buffalo Bills Odds at +3

Because they’re playing at home – and facing a division rival! The Buffalo Bills have lost four of their last six games while coming up short time and time again. While the Bills beat Dallas 16-6 to cash in as a 6.5-point home favorite last weekend, I’m not impressed at all.While quarterback Tyrod Taylor has had a fine campaign in his first season as a full-time starter by completing 63.6 percent of his passes for 2,853 yards with 20 touchdowns and just six interceptions, the Bills rank just 27th in passing and never provided their No. 1 ranked rushing attack with the balance they’ve needed this season.Making matters worse is the fact that the Bills were just mediocre across the board defensive despite hiring ‘defensive genius’ Rex Ryan to lead them to the postseason and beyond last offseason. Buffalo ranks 20th in total defense and 16th in points allowed (22.8 ppg). Now, Ryan is regretting his preseason prediction that the Bills would make the postseason. The Bills head coach regrets making a preseason guarantee that his club would snap the NFL’s longest playoff drought.“I think we got a great thing going here. We just didn’t produce the wins I thought we would,” Ryan told WGR 550 on Monday. “The thing that kind of gives this team a black eye when we’re looking at it, is that I let my mouth get ahead of everything. And I think if I would have come in there and just said, ‘Hey, we’re gonna compete’ and do all that stuff, maybe we wouldn’t have such a bad feeling about this team.”Still, the Bills have something to play for as they look to upend the Jets.“We got something to play for now,” Bills running back Boobie Dixon said. “We been having something to play for — that’s our respect and our pride. We always want that. But to send them home packing — that would be great. 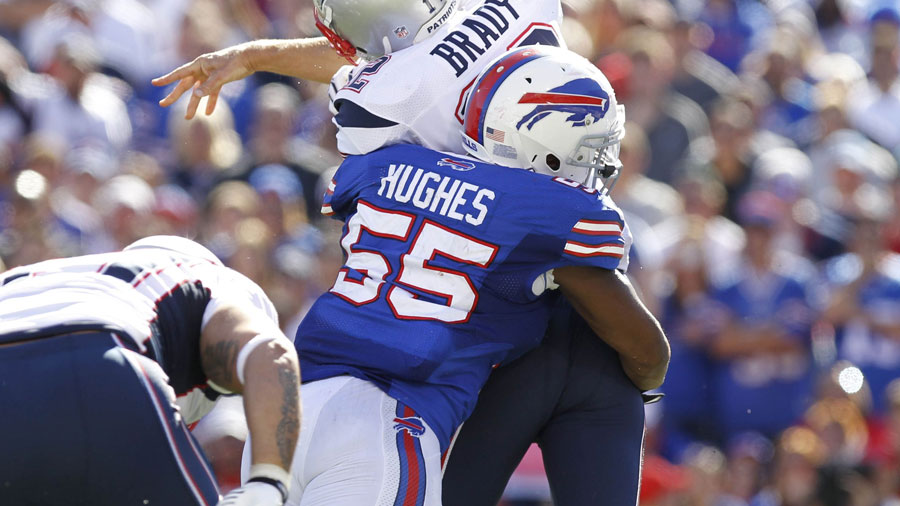 Why Bet The New York Jets Odds at -3

Because they’ve been more consistent all season long and have a huge edge in coaching! The New York Jets have gotten hot at just the right time and ride a five-game winning streak into this contest that includes their thrilling 26-20 overtime win over New England on Sunday. Veteran quarterback Ryan Fitzpatrick is having his best season as a pro by completing 60.8 percent of his passes for 2,734 yards with 29 touchdowns and a dozen interceptions.Fitzpatrick has tossed an impressive seven touchdown passes in his last three games while wide receivers Brandon Marshall and Eric Decker have become the first pair of wide receivers in over a decade to each catch a touchdown pass in the same game eight times in the same season.Veteran running back Chris Ivory leads the rushing attack with 989 yards and seven touchdowns. Defensively, New York has limited its opponents to 19.5 points to rank seventh while leading the league in run defense (81.5 ypg). No-nonsense head coach Todd Bowles has his team focused on winning this game, not getting into a war of words with the loud-mouthed Ryan and his equally vociferous team.“That’s just not me,” Bowles said about trash-talking. “I’m trying to win every game. I’m sure every coach in the league is trying to win every game and everybody has different methods. Whatever works for that team or works for us, works for us. Whatever works for everybody else, works for everybody else.”

65 percent of public bettors like the Jets to win and cover the NFL betting line and I say there’s no other pick for this contest. Let me be honest and simply admit that Buffalo has underachieved at the most inopportune times this season by consistently coming up short whenever it mattered most.Conversely, the New York Jets have played to the best of their ability under ‘elite’ head coach Todd Bowles and have had one of the best defenses in the league all season long. The Jets are 3-0-1 ATS in their last four games following a straight up win, 4-0-1 ATS in their last five games overall while the Bills have gone 1-5-1 ATS in their last seven games following an ATS win.I know the Jets are 0-4 ATS in their last four meetings against the Bills wile the home team in this AFC East division rivalry has gone 5-2 ATS in their last seven meetings, but right now, the Jets are clearly the better team on both sides of the ball, not to mention the fact that Todd Bowles can coach circles around Rex Ryan. Unless you’re related to Rex Ryan or you’re a lifelong Bills fan with blinders on, the New York jets are the right pick!My final score prediction is Jets 24 Bills 20
Older post
Newer post