NFL News and Rumors
If you’re looking to get your 2016 NFL playoff betting campaign off to a positive start and you’re looking for as much expert information as possible, then you’ve come to the right place! Thanks to this expert analysis on the handful of players that I believe are most likely to make an impact in the Kansas City Chiefs AFC wild card contest against the Houston Texans this coming weekend, you’re going to have a great opportunity to cash in with a series of potentially winning wagers on the Chief’s wild card opener. The Chiefs will visit Houston for their AFC Wild card clash on Saturday, January 9, at 4:35 PM ET, live from the gridiron at NRG Stadium in Houston, Texas.

.@Chiefs: back in the playoffs #fbf to the last time they clinched a playoff spot (2013) with an Eric Berry Pick-6! https://t.co/EUdZMPac8T

I had to start with the incomparable Eric Berry who both, beat cancer and dominated in his return from Hodgkin’s lymphoma in 2014. The 27-year-old former University of Tennessee star had 61 tackles (55 solo) and two interceptions while generally wreaking havoc on any receiver either brave or stupid enough to cross his path.Berry’s pro bowl selection this season marked his fourth such honor and clearly it wasn’t given to him out of sympathy. Berry is also Kansas City’s nominee for the prestigious Walter Payton NFL Man of the Year Award, given annually to recognize one NFL player for his excellence on and off the field.

Tamba Hali may not get the same amount of national recognition as some other big-name high profile linebackers, but make no mistake about it, he’s as good as any linebacker in the league and could urn out to be a real-difference-maker in Kansas City’s wild card opener.Now in his 10th season, Hali has recorded 48 tackles (39 solo), including 11 for loss to go along with 6.5 sacks, 18 quarterback pressures and two forced fumbles to earn his fifth straight Pro Bowl selection. Hali has recorded 33 career forced fumbles in his career to rank second in team history and has missed just two games. 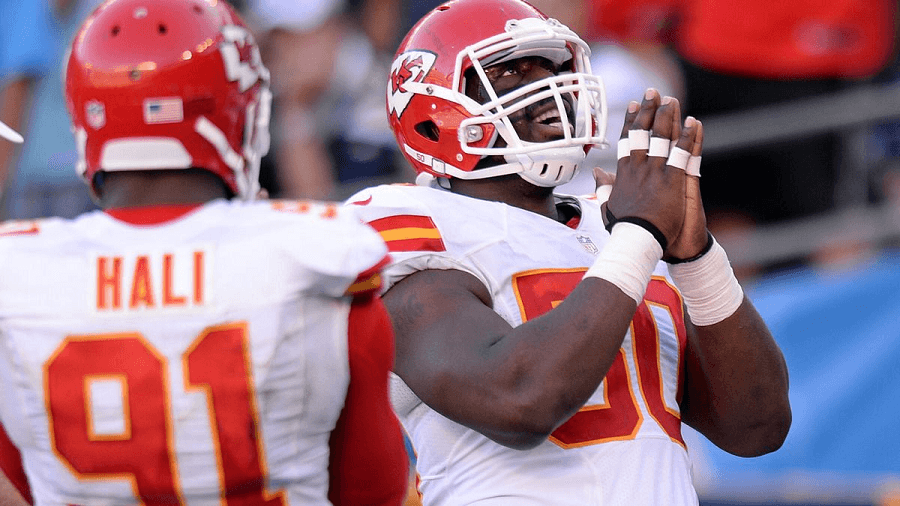 26-year-old linebacker Justin Houston missed five regular season games but still managed to earn his fourth Pro Bowl nomination after recording 7.5 sacks and two interceptions to go along with nine tackles for a loss. Since coming into the NFL in 2011, Houston’s 56.0 sacks rank as the third-most during that time.

Third-year tight end Travis Kelce had a breakout season to earn his first Pro Bowl nomination. Kelce has racked up 75 receptions for 875 yards, including five touchdowns and burned the Texans for six catches for 106 yards and two touchdowns in Kansas City’s 27-20 season-opening win over the Texans on September 13.

Rookie cornerback Marcus Peters has set the league on fire in his very first season by recording a league-high eight interceptions to tie Cincinnati safety Reggie Nelson. The former University of Washington star has returned two picks for touchdowns and has recorded a stellar 58 total tackles (51 solo), including one tackle for a loss and one forced fumble. Peterson will likely be locked up on Houston’s DeAndre Hopkins for the majority of this contest.
Older post
Newer post