NFL News and Rumors
Whether you want to look at it as 17-year NFL veteran Peyton Manning’s last shot at a claiming a second Super Bowl ring vs. Cam Newton’s chance at a first Super Bowl ring in his 5-year NFL career, or a clash between the All-time winner in the league’s MVP Award (Manning with five claims) and this year’s most probable winner (Newton), or even a game for all ages—pitting Carolina’s #1 (aged 26) against Denver’s #8 (aged 39)—as Newton seeks to grab the torch from Manning; what remains for sure is that the Newton vs. Manning quarterback is one that guarantees to leave a lasting mark in the world of NFL betting. To check out the latest odds and betting trends regarding Super Bowl 50 click here.

When: Sunday, February 7, 2015Kickoff: 6:30 PM ETWhere: Santa Clara, CAStadium: Levi’s StadiumSpread: Panthers -5Moneyline: Carolina -185 vs Denver +160Game Total: 43.5Watch: CBSStream: CBS Sports It’s what many refer to as the perfect intersection of the NFL’s past, present and future—with the two quarterbacks going all in for a win-or-go-home-crying showdown—the league is set to witness a truly memorable QB battle. Will we be having a befitting curtain-close victory for Manning in his swansong NFL season, or will Newton finally christen his name among the greats of the game with a win in his first Super Bowl appearance? Read on for a comprehensive breakdown of this delectable Super Bowl 50 quarterback duel.

Performance in the Regular Season

Since coming back from injury, The Sherriff has been a different man, going three games (San Diego, Pittsburgh and New England) without throwing any interceptions. In his two playoff games, Manning is 2-0 as a starter, going 38 of 69 passing for 398 yards and 2 touchdowns with zero interceptions. On the flipside, Super Cam is 2-0 in the playoffs with 35 of 50 passing for 496 yards and 3 TDs, along with 50 yards and 2 more touchdowns on the ground. Once again, Newton’s numbers look better here, giving the edge to Panthers.

Since being drafted in the 1st round (1st overall) during the 1998 NFL Draft, Manning is 13-13 in 26 career playoff starts, including a Super Bowl win with Indianapolis in the 2006 campaign. A win in this Super Bowl matchup would thus take his record above the .500 mark. In the meantime, Newton has been on the rise since he was drafted in the 1st round (1st overall) of the 2011 NFL Draft. After going 0-1 in his first playoff year, Newton was 1-1 last year and now he is 2-0, taking his all-time playoff record to 3-2. With the momentum of two solid wins in the playoffs this year, it’s comes as no surprise that many people are leaning on Newton and the Panthers here. Even so, Manning’s immense experience of playing in pressure-filled playoff games levels the playing field for the two quarterbacks, as far as competitiveness is concerned. So rather than side with either of the two QBs, I’d say things are sort of evened out here. 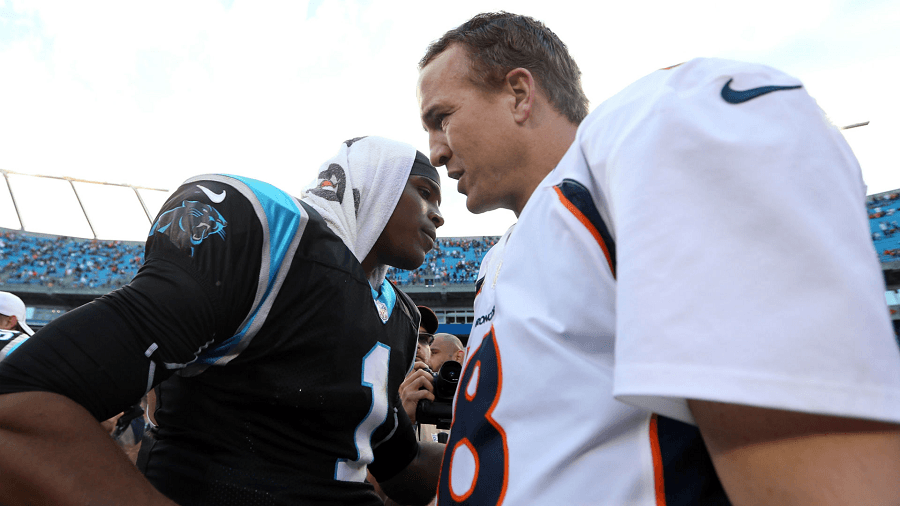 The last time the two teams met was in 2012. At the time, Newton was in his second season in the NFL, trying to find his footing in the Pros. Manning, meanwhile, was in his first season with the Broncos, and it was his first back in the game after the neck injury that had sidelined him for the entire campaign in 2011. In the end, only one team could win a game, and it was the none other than the Broncos who recorded a 36-14 rout over the Panthers.Since then, a lot has changed. Manning’s skills have sort-of watered down due to age—he is turning 40 in two months. He can still win ball games, though, using his masterful wit and ability to make a couple of big plays for his team. Newton, on the other hand, is enjoying the best form of his career, fueled by his passionate desire to win games and the ability to make plays for his teammates. His dual-threat quarterback skills further set him apart from his generation of QBs and make him difficult to contain.And as far as the two teams are concerned, Denver’s signature style of play is using their league-best defense to wear down opponents and use opportunistic chances to score points. On the other hand, the Panthers are very balanced on both sides of the ball, owning a ferocious offense and an underrated defense, which gives them the ability to face and beat any kind of opponent. This offers an interesting matchup, one that could easily go either way.

Sentimentally speaking, I’d love to see Manning bid his NFL career with a storybook ending that includes winning the Super Bowl. Unfortunately for him, the Broncos will be going against the most complete offensive team in the nation, meaning they’ll have their toughest defensive challenge of the postseason. And after the Panthers destroyed Arizona’s fifth-ranked defense (as per regular season numbers), it’s hard to think that Newton and his offense will be stopped. Nonethelesss, if the Broncos can get to Newton and his receivers like they did on Sunday against the Pats, then Denver will have a very big chance to win the game.Either way, it will be a must-see game between the presumed 2015 NFL MVP—Newton, who has built a case as the best quarterback in the league—and NFL’s only five-time MVP, Manning, who is easily one of the greatest quarterbacks to have graced the NFL. Newton and the Panthers rightfully have the upper hand in the NFL odds, but don’t—for a second—sleep on Manning and the Broncos who’ve proven that they are just as good and hungry to win it all for their Canton-bound quarterback.
Older post
Newer post