NFL News and Rumors
Derek Carr and the Oakland Raiders will look to extend their winning ways when they visit Big Ben Roethlisberger and the Pittsburgh Steelers in an intriguing Week 9 matchup that could go a long way toward determining the postseason fates of each playoff hopeful.Now, let’s find out if Carr and company can bring home the bacon against a Steelers team that will be looking to snap their two-game losing streak.

.@LKennedy72 looks at the tape and breaks down the Pittsburgh Steelers. Chalk Talk: https://t.co/DgQsuZAFzn pic.twitter.com/es9XBW8bvR

The Raiders jumped all over the New York Jets en route to a commanding 34-20 win in Week 8 while covering the spread as a 3-point home underdog.Carr completed 23 of 36 passes for 33 yards and four touchdowns while running back Latavius Murray added 113 rushing yards on 20 carries. Wide receiver Michael Crabtree caught seven passes for 102 yards and one score and the Raiders’ defense limited Jets running back Chris Ivory to a miniscule 17 yards on 15 carries.Carr and gifted rookie receiver Amari Cooper, along with first-year head coach Jack del Rio, have clearly changed the culture in Oakland.“It’s fine for some people to play from the underdog role, but I don’t like it,” said veteran defensive back Charles Woodson. “I don’t like being the underdog. I want to be expected to win games. I want these guys to go out there and be expected to win games. Yeah, it’s a little premature to be thinking that far ahead, playoff-wise, but there’s no reason you can’t think of yourself as a playoff team.”Carr has thrown 15 touchdown passes this season and only three interceptions and Cooper is on pace to become the first Raiders’ receiver since Randy Moss in 2005 to record a 1,00-yard season.“I feel like there’s room to grow and that I can play so much better than I am right now,” Cooper said.The Raiders are ranked eighth in scoring (25.4 ppg) and 20th in points allowed (24.7 ppg) and are earning newfound praise from opposing players and coaches alike.“I don’t really understand this question of guarding against (success). We’re a 4-3 team,” Del Rio said. “We’ve battled each and every week. We’re going to continue to battle each and every week. These kind of questions are kind of silly to me.” 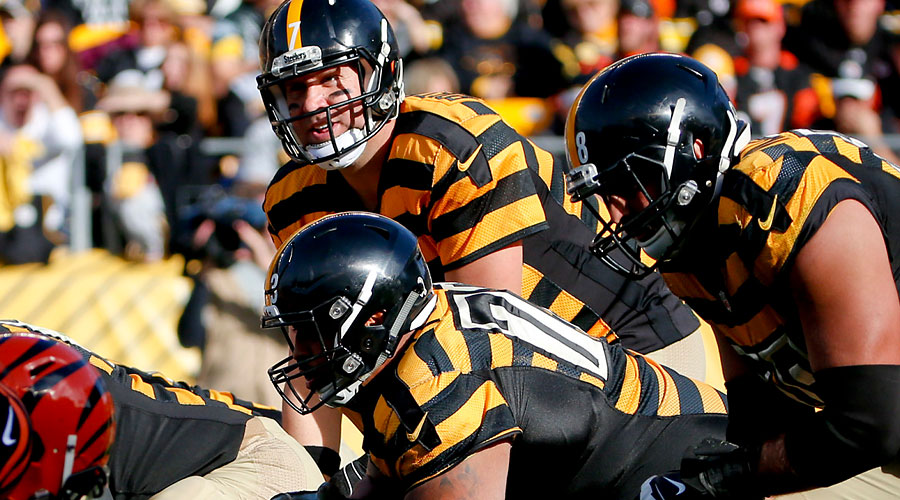 The Steelers were on the wrong end of a hard-fought 16-10 loss against division rival Cincinnati in Week 8 while failing to cover the spread as a Pick ‘Em.Ben Roethlisberger was harassed into a dismal 28 for 45 passing day with one touchdown and three interceptions while All-Pro running back Le’Veon Bell suffered a bad MCLinjury in the loss.“I’m obviously disappointed in the way that I played,” he said. “I let this team down and I let the fans down. This one is one me and I’m taking the blame and letting everyone know that I have to play better.”DeAngelo Williams will get the call in place of Bell and that’s good news, seeing as how Williams has looked like a elite back when he spelled Bell earlier this season when Pittsburgh’s dual-threat superstar missed a pair of games because of suspension.“He’s an established, capable guy who we know can deliver,” coach Mike Tomlin said. “There’s a great deal of comfort in knowing his capabilities.”Williams, who was foolishly cut by Carolina in March after nine seasons with the Panthers, rushed for 127 yards in a season-opening loss to New England before scoring three touchdowns the following week.“We’ve been here before,” Williams said. “For about eight or nine years, I’ve been a starter in this league and I started the first two games in the season. I know why (the Steelers) brought me here and I’m going to play my role. If that’s what they need me to do, then I’m going to do it.”The Steelers are ranked 24th in scoring (21.0 ppg) and a stellar fifth in points allowed (18.4 ppg).