NFL News and Rumors
The St. Louis Rams and Minnesota Vikings will both look to extend their winning ways when they square off on Sunday in an intriguing Week 9 NFC NFL Online Odds showdown that gets underway on Sunday at TCF Bank Stadium. If you’re looking to boost the annual NFL betting bankroll, then let’s find out who’s going to bring home the bacon!

The Vikings have won three straight games including their narrow 23-20 Week 8 win over Chicago as a 1.5-point road favorite. Still-blossoming quarterback Teddy Bridgewater completed 17 of 30 passes for 187 yards with one touchdown and one interception while running back Adrian Peterson added 103 yards on 20 rushes.
Peterson now ranks third in rushing with 633 rushing yards in his ‘comeback’ campaign after missing virtually all of last season because of a league-mandated suspension. “A guy as great as (Peterson), everybody is going to look at him and try to model their game after him,” Rams rookie running back Todd Gurley said. “You can consider him the best.”

.@teddyb_h2o has a 93.8 passer rating in the final 4 minutes of games in his career. MORE: https://t.co/5UqO0o86m9 pic.twitter.com/NYitAsWHTx

Bridgewater also continued his growth as a quarterback rallying the Vikes back from a 13-10 deficit heading into the fourth quarter. The second-year signal-caller hooked up with rookie wide receiver Stefon Diggs on a 40-yard touchdown strike pass 1:49 remaining before Minnesota won it on Blair Walsh’s 36-yard field goal as time expired.
“When it counted the most (Bridgewater) came through, made big plays,” Peterson said. The surprising Diggs has racked up at least 87 yards in receptions in each of the last four games and now leads the Vikings with 419 receiving yards and two touchdowns on 25 catches.
The Vikings rank 23rd in scoring (21.0 ppg) and a stellar second in points allowed (17.4 ppg). “They’re definitely an extremely physical defense,” Gurley said. “They swarm to the ball fast. It’s not just one person that stands out. They have a lot of good players. Their safeties are hard-hitters. Definitely have to do a great job this week.”

The Rams have won two straight including their 27-6 beatdown over the reeling San Francisco 49ers as a 7.5-point home favorite in Week 8. The win came on the heels of the Rams’ equally-impressive 24-6 spanking of Cleveland just one week earlier.
St. Louis has allowed just four field goals over the last two weeks and held San Francisco to just 189 yards of total offense, including a paltry 38 yards on the ground.
Quarterback Nick Foles completed 14 of 23 passes for 191 yards and one touchdown while superstar rookie running back Todd Gurley rushed for 133 yards and one score on 20 carries to become the first back in league history to rush for at least 125 yards in his first four starts. 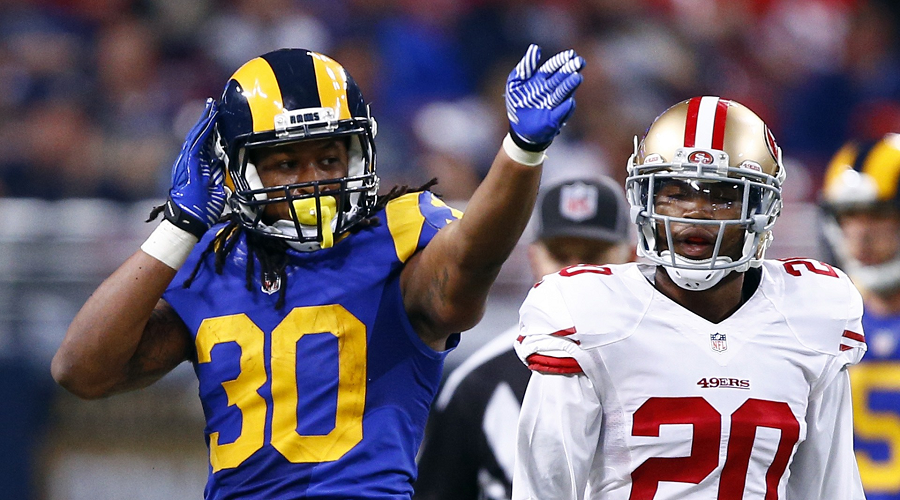 Gurley is averaging a league-high 6.12 yards per carry and ripped off a jaw-dropping 71-yard touchdown run against the Niners. “He’s aggressive, he plays physical and he has great feet and great vision, too,” Peterson said of Gurley during a television interview Tuesday. “I love what this young guy’s doing. I wish him well, but not this week against us. He’s a talented young guy. He’s hungry.”
The Rams are tied for first with 26.0 sacks and ranks a stellar fourth in points allowed (17.9 ppg) while also ranking 28th in scoring (19.3 ppg). “It feels really good, I’m not going to shy away from it,” linebacker James Laurinaitis said of the Rams’ success. “Feels good, but there’s also that part where you’re not finished.”

Believe it or not mybookie.ag NFL online betting enthusiasts, but this matchup could turn out to be the most competitive pairing on the entire Week 9 docket. Having said that, let me also say that I fully expect the Minnesota Vikings to get the win and narrow ATS cover and 51 percent of the betting public agrees!
Besides the fact that the Rams are just 3-7 ATS in their last 10 games following an SU win, I believe the Minnesota Vikings are going to find a way to make a few more game-changing plays in this contest than St. Louis.
First and foremost, the Vikes are playing at home and will have a stadium full of rabid fans cheering them on as they attempt to earn a playoff berth in the NFC this season.
The Vikings also have the better quarterback in this NFC clash and stingier defense. Minnesota has covered the NFL betting line in six straight games while also going 6-2 ATS in their L/8 games against their NFC counterparts.
Combine all of the above with the fact that the Vikings are 21-8 ATS in their last 29 games and a consistent 18-7-1 ATS in their last 26 home games and it’s easy to see why Minnesota will get the home win and slight ATS cover.
My Pick: Minnesota 20 St. Louis 17
Older post
Newer post