NFL News and Rumors
Much of the talks about the Panthers ahead of their Super Bowl 50 meeting with the Denver Broncos has been focused on Carolina’s offense, and rightfully so, going by the way Cam Newton and gang have been decimating high-ranked defenses (read that Seattle and Arizona) in their playoff run. The secret many people don’t know is that the Carolina defense has just been as commanding in the playoffs, if not the entire season, a key reason the Panthers have delivered a host of impressive victories in the NFL betting lines.

Since suffering that 7-point road loss to the Falcons, which was in fact their lone loss of the season, the Panthers have commendably improved in their scoring defense, allowing just 16.33 PPG, which is way below their season average of 19.28 PPG (including the playoffs). To put this into proper perspective, the Broncos (who had the No. 1 ranked defense in the country) are allowing exactly 18 PPG in their last three games, which is more-or-less within their overall range of 18.33 PPG allowed in the season. Considering the last two clubs the Panthers have faced in the playoffs—Seattle and Arizona—are led by Russell Wilson and Carson Palmer, respectively, who are QBs that are known for their big-play abilities; it is very impressive that Carolina has fared better that the top-ranked Broncos D, as per the recent scoring defense numbers. So, just in as much as Denver is expected to take away some of the big plays from the Newton-led offense, the Panthers defense should be able to do the same to Peyton Manning and his offense in Super Bowl 50.

When playing Arizona’s No.1-ranked offense, Carolina’s defense forced a whopping seven turnovers. For bettors who’ve observed the Panthers this season, you’d agree that this wasn’t something new. I mean, this is a Carolina team that finished the regular season with an NFL-best +20 turnover differential, along with an NFL-best 39 takeaways.  In the playoffs, this defense has continued to show that tenacity, forcing nine turnovers in two games, while the O-line has been disciplined, turning over the ball just once. To understand the importance of the Panthers strong ability to force turnovers off opponents while limiting their own, consider the important brief roll-back look at Super Bowl betting history detailed below. Last year, New England finished the regular season with a +12 turnover margin and the Seahawks were just right behind with a +10 turnover differential, with both teams finishing in the Top 4 in the NFL. As you all know, both teams went on to play in the Super Bowl, with the Patriots (who owned a superior turnover margin) getting the win. In 2013, when the Seahawks won the Super Bowl, it was no different, as they led the NFL with a +20 turnover differential during the regular season. In the year before that, the NY Giants and Patriots were a combined +39 in turnovers, each ranking in the Top 4. Again, you all know how that story went. I could go back further, but I am guessing by now you already get my point, which is—the ability to avoid backbreaking miscues and capitalize on opponents’ mistakes is a crucial element when it comes to winning games in the Super Bowl. And given the way the Broncos have been turn-over prone, more so in the regular season, Carolina and its league-best turnover margin should be poised for a superior performance in Super Bowl 50. 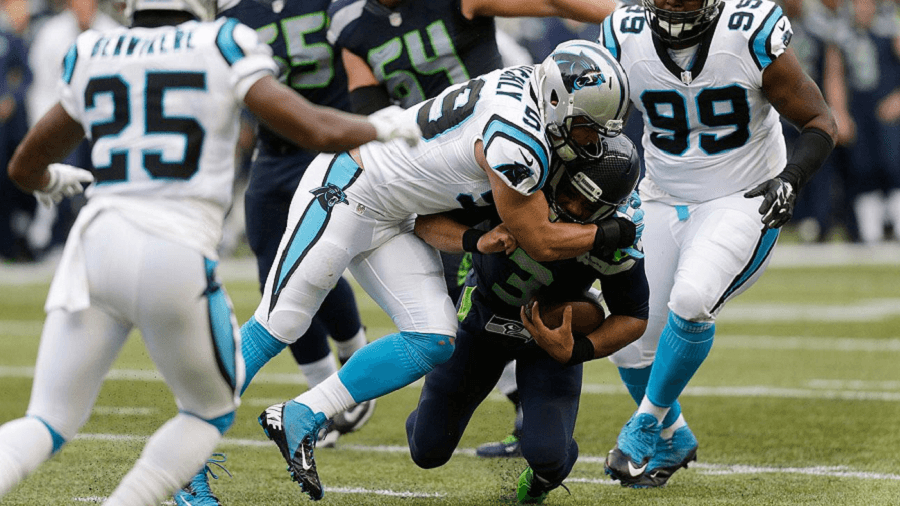 Undoubtedly, the Broncos have more tried-and-tested defensive players, led by the likes of Von Miller. That, however, isn’t to say that the Panthers are not able to match up to them. To mention a few—Josh Norman is arguably the best defender in the league at locking down No. 1 receivers, something he’s repeatedly done all season. Luke Kuechly is every team’s nightmare and his ability to fly all over the field makes him nearly unstoppable; he already has two interceptions this postseason, both returned for TDs, making him the first player since Asante Samuel in 2006 to have multiple interception return touchdowns in a single postseason. Meanwhile, Kawann Short (11 sacks) is the definition of terror to quarterbacks. And after this unit melted down Palmer with four interceptions, one of which was returned for a touchdown Kuechly, along with two lost fumbles and three tallied sacks, it would be silly to expect the less-than-stellar Denver offense, led by the iffy Manning, to have it any better.

If what the Broncos defense accomplished against the Pats was impressive, then what the Panthers’ D has done to be the Cardinals and Seahawks should be considered even more impressive. And with that in mind, together with the pointers given above, another strong (superior) performance should be expected from Carolina’s defense in the Super Bowl.
Older post
Newer post