NFL News and Rumors
With the NFC Championship Game coming down to two of the best offensive units in the Conference, the Arizona Cardinals and the Carolina Panthers, there is a high likelihood that the NFL betting winner of this Conference Championship matchup will be determined by the team with the team that outlasts each other offensively.

Despite struggling in a couple of games, the Cardinals attack finished the regular season ranked #1 in offensive efficiency, totaling an NFL-best 6,533 total yards (averaging at 408.3 YPG) and averaging the second-best points per game in the league (30.6 PPG). In fact, had they scored more than 6 points in their Week 17 loss to Seattle, they would have easily topped Carolina’s league-best average of 31.3 PPG from the regular season. With such a tried-and-tested offense, it totally makes sense that Arizona is expected by many to have a big attacking performance against Carolina.

After being hampered by injury in 2015, Palmer came back this year hell-bent on staying healthy and playing effectively for his team, and he did just that, posting a career-high 35 touchdowns (tied for second-most regular season TDs this season) along with an astounding 4,671 passing yards. Against the Packers, Palmer didn’t look his best, but was still able to throw for 3 TDs, leading the Cards to their first NFC Championship game since 2009. Mind you, the win earned the veteran quarterback his first playoff win in three tries—something that should be a big motivation for him and his offense to shine once again.

The biggest reason behind Palmer’s efficiency in the offense is that the Cards have future Hall of Famer Larry Fitzgerald carrying the team on his back in the receiving department, along with solid support from receivers Michael Floyd and John Brown. Fitzgerald has particularly been a leader in the team and dependable target for Palmer. Besides leading Arizona’s receivers in the regular season with team-bests of 109 catches, 1,215 yards receiving and nine TDs, he had a big game against the Packers last week, leading the all receivers with 8 catches for 176 yards and the game-winning touchdown against Green Bay. That performance took his tally to 912 yards receiving and 10 TDs in just eight career postseason games. If Fitzgerald, Brown (1,003 yards receiving and seven TDs in the regular season) and the rest of the receivers can take advantage of the same Carolina mistakes that saw Russell Wilson and his receivers score 24 unanswered points in the second half of their Divisional Round game last week; the Cards could be due for a big passing game. 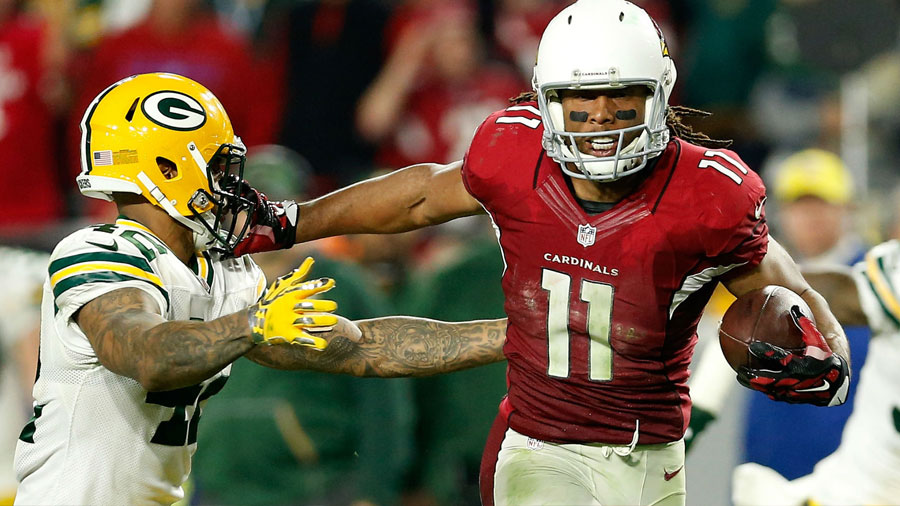 The season-ending injury to starting running back Chris Johnson was expected to derail Arizona’s season, but as things turned out, it was actually a blessing in disguise that opened the door for the next-man-up in rookie running back David Johnson. In his five regular-season starting duties since his namesake’s injury, the rookie posted an impressive 442 yards and four touchdowns. Johnson’s ability to double as a receiver makes him a solid weapon in Arizona’s passing game. The rookie wasn’t able to do much last week, but that could easily change, given that the Panthers haven’t been that solid in defending the run. His presence, along with his fellow running backs, will substitute the fact that Palmer has not been able to do much of pounding the ground, given that he is coming off an ACL tear from last year.

Given the way the Panthers have been playing well at home and wreaking havoc through their versatile attack, the Cardinals will need more than just their passing game to upset Carolina. Arizona’s running game will need to overcome its funk against Green Bay and come up big, while the defense must also chip in with a couple of key stops. Fortunately, the Cardinals have the necessary weapons to do so, especially in their volatile offense, so it won’t be a surprise to see the Cardinals beat the Panthers by more than a touchdown.
Older post
Newer post