NFL News and Rumors
The highly underrated Carolina Panthers (16-1 SU, 12-5 ATS, #1 seed—NFC South Winner) have been continually defying NFL odds, yet bettors are still not giving them the respect they deserve. This Sunday, they have another chance to impress in the NFL lines when they host the Arizona Cardinals (14-3 SU, 9-8 ATS, #2 seed—NFC West winner) in Charlotte. Read on for our complete breakdown of this NFC Championship game and why we believe the Panthers are a worthy NFL pick in the NFL betting lines.

By now, you must be aware that the Panthers are undefeated at the Bank of America Stadium this season (8-0 SU), a record that stretches back to last season for a 12-0 SU in its last dozen home games, along with a stellar 8-4 ATS mark. Laying three points, which is no more than the usual standard home-field advantage displacement, therefore makes a lot of sense, given that the Panthers have far more than your average home-field advantage. A good case in point is how they easily took care of the Seahawks last week.

Whereas the Cardinals were to squeak their way past an injury-laden and tired Green Bay team, the Panthers comfortably kept the Seahawks at arms-length right from the get-go. And if they managed to score 31 points against Seattle stellar defense, they should certainly be able to do even better against a ‘washed-up’ Arizona defense that has been leaking points in recent games.

Carolina’s Multifaceted Offense Will Be Tough to Handle

Arizona’s defense is modeled such that it can best handle pass-oriented QBs, a good reason they were able to contain the Packers for the majority of the game until that Hail Mary pass that sent the game to overtime. It’s however one thing to beat up teams like Cardinal, 49ers, Rams, Ravens and Browns, but quite another to stop the dual-threat skills of Cam Newton. The Newton-led offense presents a full spectrum of threats, capable of running and passing the ball efficiently. The last time the Cardinals faced such a team was the Seattle Seahawks, led by another dual-threat QB in Russell Wilson, and as we all know, the Cardinals had no answers to them, losing 36-6 at home in Week 17.

The Panthers are not only able to win the game through passing and running the ball, but their defense is equally adept at defending against all kinds of opponents. Last week’s win against Seattle is a good case of handling teams that can run and pass the ball. But as you all know, the Cardinals have struggled in running the ball recently and Carson Palmer is never good at scrambling the ball on the ground. The Cards are therefore most likely to pass the ball more this week. This should be very manageable for the Panthers front 7 that has comfortably won all their games against pass threats that are in the same level with Zona, such as the NY Giants, the Saints, the Falcons, the Colts and the Packers. Okay, point of correction, the Giants did lay 35 points on the Panthers in one a half, so nothing was comfortable about that, but I guess you get my drift about Carolina’s capacity to handle pass-oriented opponents and win those games, right? 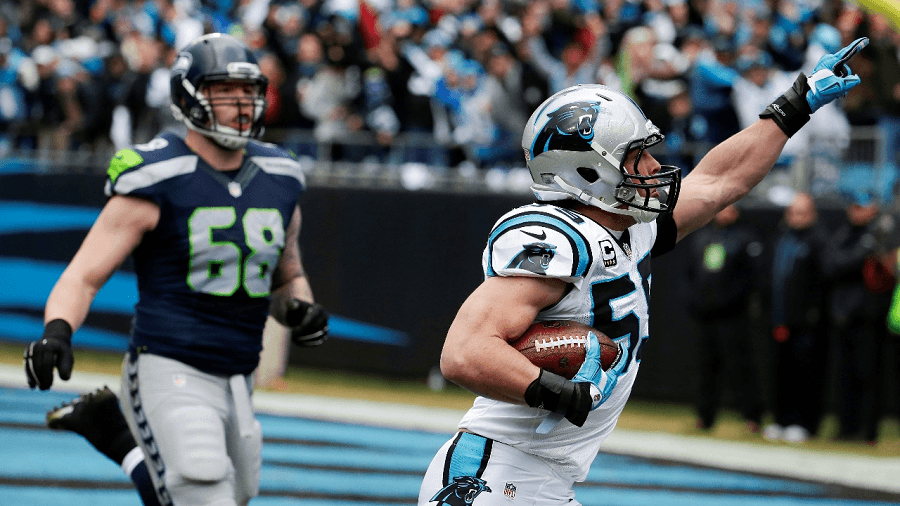 Carolina, just like Arizona, finished best in the league with 22 forced fumbles (22), which is impressive for both teams. However, Carolina had an added advantage, as Carolina O-line was good at offering protection, making the Panthers offense record the lowest number of committed fumbles in the league this year. Not to mention, the Panthers have a strong sack résumé, ranking 6th in the NFL. Did I mention that Carolina had the best turnover differential in the NFL at +20 (6 points better than the next competitor, the Chiefs)? Yeah, there’s that too.Even more impressively, Carolina’s defense led the NFL in interceptions during the regular season, something they continued in the playoffs by intercepting Wilson early in the game. And after Palmer was intercepted three times by Green Bay’s middling defense (which was actually lucky for him because the picks could have been more), you can’t help but feel that Carolina’s defense will have a field day against Palmer. In case you forgot, this defense is led by Luke Kuechly, who is literally the best LB in the NFL, considering his absolutely scaring ability to do everything defensively—crossing routes, flats, stuffing the run and even doing his things down the field. No way the Cardinals will be stopping this anomaly of a person.

Carolina Feeds on Being Underrated

Throughout the season, excuses have come aplenty to try and water down Carolina’s impressive run, including talks about playing a soft schedule, belonging to a weak division, riding on luck etc. Even when playing Seattle, everyone was all up in Newton’s expletive, talking about how he wasn’t good enough to play well in a big game, or how his offense would suck against Seattle’s defense. You all know how that story ended.What you all need to understand is that change is possible in the NFL and players can always get better. The Panthers put in work and that’s why they moved from a 7-8-1 season in 2014 to a 15-1 mark in 2015. Meanwhile, Newton is no longer the turnover-machine he was a few years back; he has refined his work ethic, passing mechanisms and his ability to make reads. And unlike the past when he was all about himself, he’s become a team-player, something we saw last week, as he passed for one TD, while letting running back Jonathan Stewart take the glory with his 106-yard, two-TD performance against Seattle. On top of everything, Newton knows how to balance his decision-making on the field, no wonder he finished the regular season with 45 total touchdowns (35 passing, 10 running). That’s the kind of stuff that MVPs and Championship-winning QBs are made of, which could easily prove to be a big difference-maker this Sunday.

Obviously, nothing is ever guaranteed in the NFL lines, anything can always happen. And in their own respect, the Cards are a good team capable of holding their own well-enough. Even so, Palmer has been looking shaky and it is only going to get worse for him as he faces arguably the best front 7 defense in the NFL, which should allow the Cards to get to him even without having to blitz. The Panthers will therefore win the battle in the trenches. As far as offensive strengths are concerned, the Cards don’t have a game-changing running back, as evidenced by their poor rushing stats in their last two games. The Panthers, on the flipside, have tons of talent in the running department, led by Newton and Stewart. Regarding passing the ball offensively, Newton has shown that he is capable of going toe-to-toe with the best passers, so Palmer shouldn’t be an exception. Oh, and if you are worried about Carolina’s sickening habit of coughing up big leads (but winning anyway), Coach Ron Rivera said his team will be mindful of that concern this week, so don’t bet on it happening.Considering all the above pointers, Carolina (-3) certainly looks like a solid bet for both the SU and ATS. Take note that I’m not saying the Cardinals won’t score, all I am saying is that the Panthers will score more to win the game and cover the cheap spread.
Older post
Newer post