If you’re an old school gambler, then you became used to the sound of the slot machines turning and settling on their outcomes, the clicks and clacks running as the wheels turn. If the combination turned out to be a winner, then you heard the flood of coins heading into the tray at the bottom of the machine. You also got used to watching people feed the machines from a big cup of coins, pulling the handle over and over again to start things tumbling once again.

Poker, for you, was a game that you played at a table, with your competitors sitting around you and monitoring you for the slightest tell about what you had in your hand – or what you didn’t have. You engaged in the same intrigue, seeking that one hint that could propel you to winning the big pot in the middle of the table.

Video slots and online casino have become popular alternatives. When it comes to the video slot machine, the moving gears and wheels have been replaced by a mere visual representation. For those who play video slots for entertainment, you get more sophisticated graphic elements to the game, and some bonus games that the traditional machines didn’t offer.

While the traditional machines had mechanical limits, video slot machines generally feature five reels instead of three. This increases the number of possible outcomes dramatically, which means that odds can go as high as 300 million to 1 against a particular outcome. This means that the manufacturers do not have to apply weights to the payout symbols. Instead, those symbols that pay more simply don’t appear as often on the reels, while the lower-paying symbols show up more times.

Video slots also offer the chance to play more than one line at a time. On a traditional machine, the player could only play the middle of the three symbols that show up on the reels, going across. Playing multiple lines involves running the line from bottom left to upper right as well, or any of the other available patterns. More lines bet per spin means a larger wager per spin, but it also means that the potential for winning is greater.

Because of the larger amount of money that’s on the line, sometimes players feel like they’re just watching their money go down the drain. To keep this from making the games less popular, manufacturers frequently offer bonus games that allow players to win back many times the initial bet for that game. The machine encourages the player to keep going to get to the bonus round, because winning that game could bring the player back into the black. 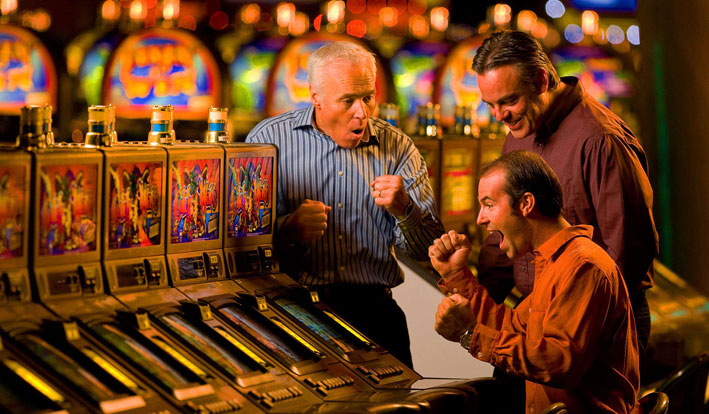 Most video slot machines are programmed to pay out between 82 and 98 percent of the money that players wager. However, different jurisdictions have different requirements. In Nevada, these games are only required to pay out 75 percent of bets. However, in New Jersey, the minimum is 83 percent. For video slots, the payout percentage is generally set when the software writers set up the program. In some jurisdictions, this software can only be changed when state gaming officials are present.

Video poker works in a similar way to standard poker, at least in terms of the way that the game is played. However, the representation is visual, with the cards appearing on a screen rather than actually being physically present. Payouts follow the rules of the jurisdiction in question. It’s easy to fall behind in this sort of game more quickly, because the deal happens at a much higher rate of speed, so paying attention to your bankroll is key.