A superfecta is a wager placed in pari-mutuel horseracing betting that has the player pick the first four finishers in a horse race in order. If the order turns out to be correct, then the payout is considerable, due to the unlikelihood of success. Within horse racing, most exotic bets like this carry a $1 minimum. However, because the superfecta is so hard to pull off, some racetracks allow betting for as little as 10 cents on it. This has become popular with fans who don’t have a huge bankroll but still want to cover a lot of different combinations and increase their chance for a big payoff.

Winning a Superfecta is not Impossible…

One particularly unusual story from the 2013 Kentucky Derby illustrates both the difficulty and the intrigue that accompany the superfecta. A woman at Churchill Downs was putting bets down for the first time in her life at the horse track. She made 120 $1 bets. She predicted the winner (Orb) as well as the second, third and fourth place finishers. Before income taxes were taken out, that meant that she had won $28,500.

Orb was the 5-1 favorite to win the race outright, and so picking him in the first position wasn’t that big of a reach. However, Golden Soul, who finished second, entered the race as a 34-to-1 long shot. Picking him to come in second involved either a huge amount of luck or a certain amount of extrasensory perception. Revolutionary, who came in third, was a 6-1 contender for the win, and fourth place Normandy Invasion, with 9-1 odds, were not surprises, but simply getting the order was amazing. The race could certainly have turned out a lot differently, as both Revolutionary and Normandy Invasion looked like they were headed for a 1-2 finish until the last quarter mile saw Orb and Golden Soul gallop past them both.

Of course, if she had placed more on each bet, the woman would have won even more. However, turning $120 into $28,500 is an amazing bet in any situation – especially the very first bet that someone placed at a horse track in her lifetime. Orb, of course, won a lot more, taking home a purse of $1,439,800 – or $11,802 for each second that he faced on the track. 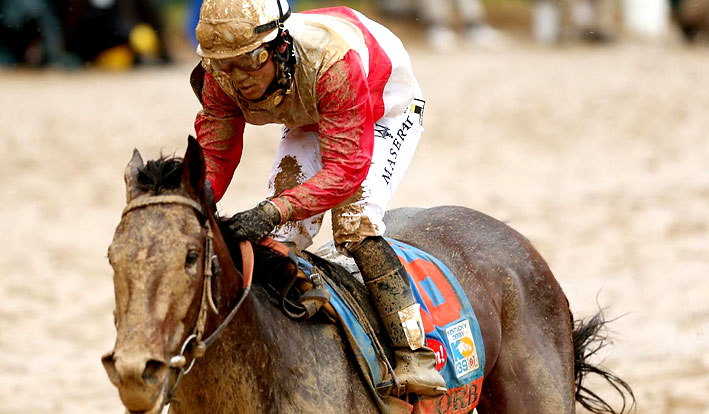 At the 2015 Kentucky Derby, a $2 superfecta bet brought in a payout of $48,126 before taxes. In contrast, the trifecta (which involves choosing the 1-2-3 finishers in order, paid significantly less — $3,952.40 before taxes. The exacta (first and second place in correct order) would yield $329.80 for a $2 bet. The low bet required for all three of these fairly large payoffs shows you just how difficult it is to predict the order of finish. Such bets as the “win place show” which allow the bettor to choose the three top finishers and win no matter what order those top three actually achieve, have a significantly smaller payout but are (not surprisingly) much easier to win.

Don’t Run to the Track Just Yet…

Turning $2 into $48,000 sounds like an amazing result – and it is. These finish-order bets are known as the exotic bets, and they feature huge winnings. However, the vast majority of these types of bets end up going to the track (or the house) rather than the person who made the bet in the first place. If you have a couple dollars to spend and don’t mind chasing a little bit of luck, the exotic bets can end up being a lot of fun. If you’re a serious horse racing gambler, you’ll want to hedge that bet with some higher-probability action, but one of the fun things about betting at the horse tracks is letting a bet ride that you know shouldn’t win – and then hoping that it does.