NFL News and Rumors
Levi’s Stadium will be the sight of Sunday’s week 15 NFL odds match up between the Cincinnati Bengals and San Francisco 49ers. The two teams will both look to get the ‘W’ when they take to the gridiron at 4:25 PM ET. Now, let’s find out who’s going to win and cash in!

When: 4:25 PM ET, Sunday, December 20, 2015Where: Levi’s Stadium, Santa Clara, CaliforniaNFL Odds: Cincinnati -4.5Over/Under: 40.5The NFL Week 15 NFL odds for this contest have the visiting Bengals as 4.5-point favorites to beat the Niners while the Over/Under Total sits at 40.5. The Bengals are a -200 favorite against the NFL Moneyline while San Francisco sits at +178. Can Bengals Rebound Without Dalton?

#49ers are back at work preparing for the Bengals. View top practice photos from 2015: https://t.co/XTxvby6oXz pic.twitter.com/7xwLdy6TUw

The 49ers got manhandled in their humbling 24-10 Week 14 loss against Johnny Manziel and the Cleveland Browns as quarterback Blaine Gabbert got sacked a jaw-dropping nine times in the loss. “We’ve got to block them,” 49ers coach Jim Tomsula said of the line’s primary problem. “Lose leverage on a guy and a guy comes through the inside of you. You’re blocking a guy on the edge and he gets your outside hand down and he gets over the top of you …The Niners failed to cover the NFL betting line as a 2.5-point road underdog in the loss and average just 14.5 points per game while allowing 24.2 per contest defensively.

Why Bet The Cincinnati Bengals Odds at -4.5

The Bengals had their modest two-game winning streak snapped in their 33-20 Week 14 home loss against Pittsburgh as 1-point favorites. More importantly, starting quarterback Andy Dalton broke a bone in his throwing hand and will be out of the lineup for the foreseeable future.Still, veteran offensive coordinator Hue Jackson said he’s going to attack opponents’ defenses with backup A.J. McCarron like he would with Dalton under center.“Did he start out (Sunday) being a manager? He threw it all over the field, right?” Jackson told reporters. “That gave us the best chance to win. It didn’t work. I’m not going to tell you I’m going to start with him being a manager. He’s going to start off doing what we need him to do to win. That’s what we pay him for. We pay him to win games. So whatever it takes for him to win, that’s what he’s going to do. If you guys think he’s going to turn around and hand it off 70 times to win a game, then you guys are mistaken. That’s not going to happen. That’s not going to happen.” 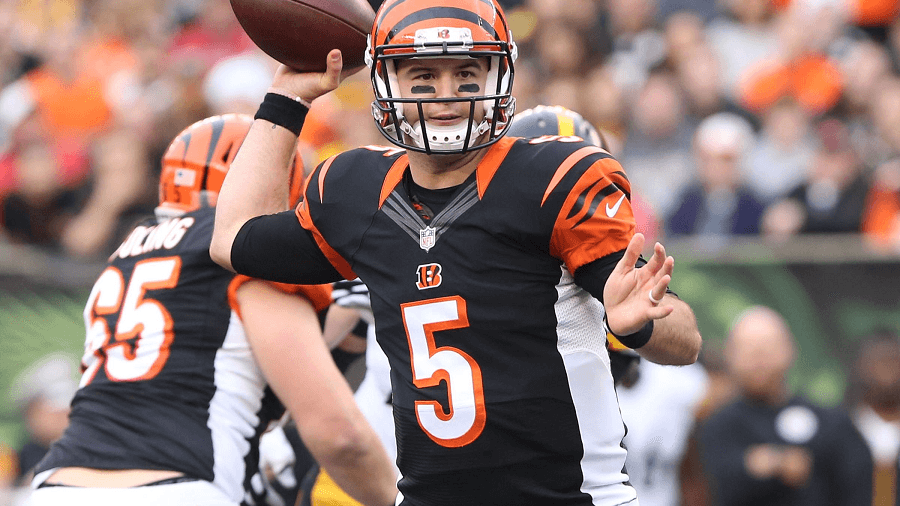 McCarron completed 22 of 32 passes against Pittsburgh wile tossing two touchdowns, but the former Alabama star also tossed two costly interceptions in the loss. The Bengals average 27.2 points per game and limit their opponents to just 17.6 per contest defensively.