NFL News and Rumors
The San Diego Chargers (4-11) have little to no motivation to play well in Week 17 against the playoff-bound Denver Broncos (11-4). In main, this is because winning this game could hurt their NFL draft stock, and also because a 5-11 record is just as bad as 4-11, so it would really matter less whether or not they win. The Broncos, on the other hand, have already guaranteed a playoff spot, but need to win (or for Kansas City to lose) if they are to clinch the AFC West crown. More notably, a win by the Broncos (coupled with a loss for the Patriots) could help Denver to the No. 1 seed in the AFC. So, in short, the Broncos, have a lot to lose in this game, something many NFL betting pundits believe will motivate Denver for a winning performance. But are the Broncos that much of a sure bet, or will the Chargers play spoilers in this divisional matchup? Read on to find out.

This Sunday, January 3rd matchup is scheduled to take place at the Sports Authority Field at Mile High, Denver, starting at 4:25 PM ET on CBS. The early NFL betting lines have the Broncos favored to win by 9 points, with both teams trading at -110 in the Money Lines and 41 points in the OVER/UNDER betting. Advise your betting tickets with the analysis given below.

Why Bet on the Chargers at +9

Despite their 4-11 SU record plus having a banged up and rather unmotivated team for most of the season, the Chargers sport a decent 7-8 ATS record, including a 4-1 ATS mark in their last five games, something that could allow them to at least cover the spread against the Broncos, who are 1-2 SU and ATS in their last three games. Last week, for example, saw the Bolts play their hearts out, only to drop to a 23-20 overtime win by the home-playing Raiders, but the Chargers still managed to pay bettors on the ATS lines as a 4-point underdog. If the Chargers can find a way of mustering some offense from QB Philip Rivers’ flowing aerial game (San Diego is ranked fourth in the NFL with a little over 292 passing yards per game), and the defense also makes a couple of key stops against Denver, it wouldn’t be a surprise if the Chargers somehow keep things tight for another pay on the ATS NFL lines.

Why Bet on the Broncos at -9

Although the Broncos have their fair share of injuries to deal with this Sunday, there Chargers have a more banged up group, offering Denver some edge in terms of team depth. For instance, in Week 16, the Bolts lost a number of players to injuries, including LG Orlando Franklin (concussion), LT Chris Hairston (abdomen) and center Trevor Robinson (concussion). And on Monday, San Diego’s Pro Bowl safety Eric Weddle was placed on injured reserve due to a strained groin. As per the Chargers, Weddle and the other 16 players on injured reserve have been told they will not be allowed to make the trip to Denver with the team. 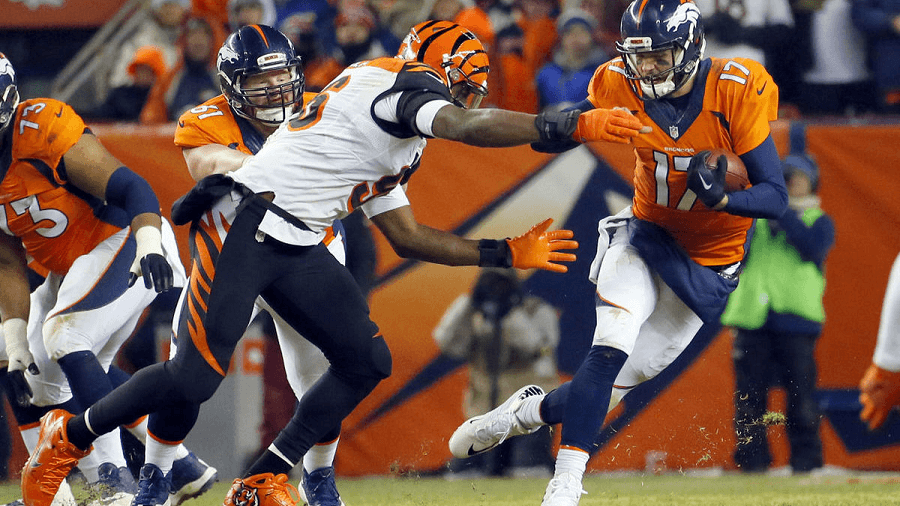 Injuries aside, the Broncos have a good thing going for them in the offense, as quarterback Brock Osweiler continues to play effectively and the running back tandem of C.J. Anderson and Ronnie Hillman is making good use of their carries. And for the most impressive side, the Broncos defense is renowned force to record with, ranked top in the league in defending against the pass. Rivers and his passing game will therefore be in for tough showing, and if San Diego’s out-of-sorts backfield cannot get into the party, it will be quite difficult for the Chargers to hang here.

Although Osweiler only has two multi-TD games in the six games that he has started since taking over from the injured Peyton Manning, I expect the hyped-up crowd at Mile High (along with the day’s projected sunny weather) to allow him to air it out for two or more TDs. Breaking down Denver’s stellar passing defense (the only defense in the league allowing less than 200 passing yards per game) will be tall order for Rivers and Co., but having seen the QB do some damage even against solid defenses, the San Diego QB could equally be up for a decent game. With that I like both teams scoring around 20-or-more points, obviously with Denver causing more havoc courtesy of a career-day from Osweiler and good contributions from his running backs.My Final Predicted Score: Denver 33, San Diego 21
Older post
Newer post