NFL News and Rumors
With starting quarterback Andrew Luck still at least one more week away from returning, the Indianapolis Colts will once against turn tin order to get the ‘W’ when they square off against the Jacksonville Jaguars in their Week 14 AFC South divisional clash. Now, let’s find out if the ageless veteran can help the Colts bring home the bacon!

The Colts got completely man-handled in their overwhelming 45-10 loss to Pittsburgh last week and never came close to covering the spread as a 10-point road dog while suffering their first loss under Hasselbeck’s leadership after winning their first four games under the veteran. “We couldn’t get anything going offensively,” Colts coach Chuck Pagano said. “We got beat thoroughly in all three phases.”Despite suffering back and neck injuries last week and giving way to third-stringer Charlie Whitehurst, Hasselbeck is schedule to start this week while Luck continues rehabbing in anticipation of a return as early as next week. The Steelers’ defense limited Indianapolis to 240 yards of total offense while forcing three turnovers and five sacks. “We knew it was coming and we didn’t handle it well,” Hasselbeck said. “Then we were prepared to handle it, and they would just rush three.”Indianapolis had three rives that started in Pittsburgh territory but managed to score just three points on the trio of possessions. “You have to take advantage of it,” Pagano said. “You have to put points on the board, and we couldn’t get it done.” Hasselbeck struggled in his fifth start for Indianapolis. “They did a really nice job of keeping me off balance,” Hasselbeck said. “I’m disappointed in how I played. Extremely disappointed.”

The Jaguars have lost two straight games including their heartbreaking 42-39 defeat against division rival Tennessee last weekend as 3-point road dogs. “It is disheartening,” Jaguars coach Gus Bradley said. “When you look at the defense and we didn’t play up to our capabilities. The missed tackles and the third downs and not getting pressure — I think the rush and cover work together and this game it did not work together.” 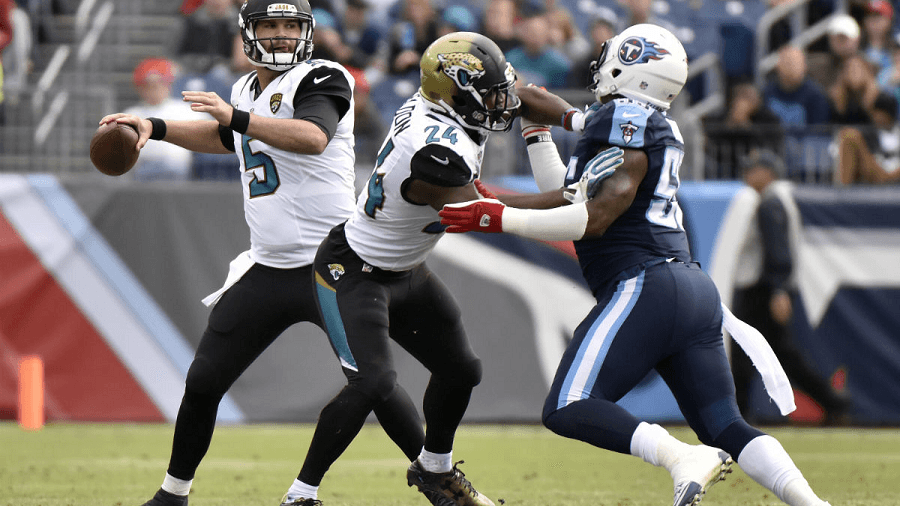 Young quarterback Blake Bortles tossed a franchise-record five touchdown passes in the loss and has thrown at least one TD pass in every game this season. Unfortunately, the Jags’ defense has more holes in it than Swiss cheese as it ranks 30th in points allowed (28.4 ppg).Bortles completed 24 of 36 passes for 322 yards and five touchdowns. Wide receiver Allen Robinson caught 10 passes for 153 yards and three touchdowns. “(Allen) is by far the best (receiver) I’ve ever played with,” Bortles said. “I think he’s definitely special and I think we have some other guys around him that are unbelievable, too.”