NFL News and Rumors
Seattle Seahawks superstar quarterback Russell Wilson was selected by Michael Irvin with the first overall pick in the 2016 NFL Pro Bowl Draft on Wednesday night while fellow Hall of Fame legend Jerry Rice took New York Giants’ two-time Super Bowl winning signal-caller Eli Manning with the second overall pick. Manning will have his favorite target to throw to in wide receiver Odell Beckham Jr. when the 2016 NFL Pro Bowl gets underway on Sunday at 7:00 PM ET, live from Aloha Stadium in Honolulu, Hawaii. “Hopefully, we can be on the same page and hook up and get a couple touchdowns,” Manning said. To check up on the latest odds for this year’s NFL Pro Bowl as they are updated make sure to click here.

Russell Wilson and Eli Manning were the top picks in the 2016 Pro Bowl draft. https://t.co/AjGWkqabxl

Beckham and Los Angeles Rams defensive lineman Aaron Donald will serve as active-player captains for Team Rice while Cincinnati Bengals defensive lineman Geno Atkins and Atlanta Falcons running back Devonta Freeman were named captains for Team Irvin. Manning tossed 13 TD passes to Beckham during the regular season and will look to hook up early in the Pro Bowl. “We’ll have to talk about it,” Manning said. “We’ve got a few plays that we’ve run over the years that we might have to throw into the offense, and hopefully, we can get together on a couple big plays.”Falcons wide receiver Julio Jones was picked third overall by Team Irvin while Raiders linebacker/defensive end Khalil Mack was drafted fourth overall by Team Rice. Irvin then added a trio of defensive players with his next three picks by selecting Seahawks cornerback Richard Sherman, Detroit Lions defensive end Ezekiel Ansah and Seahawks defensive end Michael Bennett. The former Dallas Cowboys wide receiver then added wide receivers A.J. Green (Cincinnati Bengals) and DeAndre Hopkins (Houston Texans) in the sixth and seventh rounds, respectively.Miami Dolphins wide receiver Jarvis Landry was selected by Rice with his third overall pick and added Oakland Raiders quarterback Derek Carr and wide receiver Amari Cooper with his next two picks. Rice then selected Kansas City Chiefs cornerback Marcus Peters and Minnesota Vikings star running back Adrian Peterson with his next two picks. Thirty-four players, mostly linemen and special-teams players were pre-drafted Tuesday. Forty-eight players were drafted or assigned Wednesday. 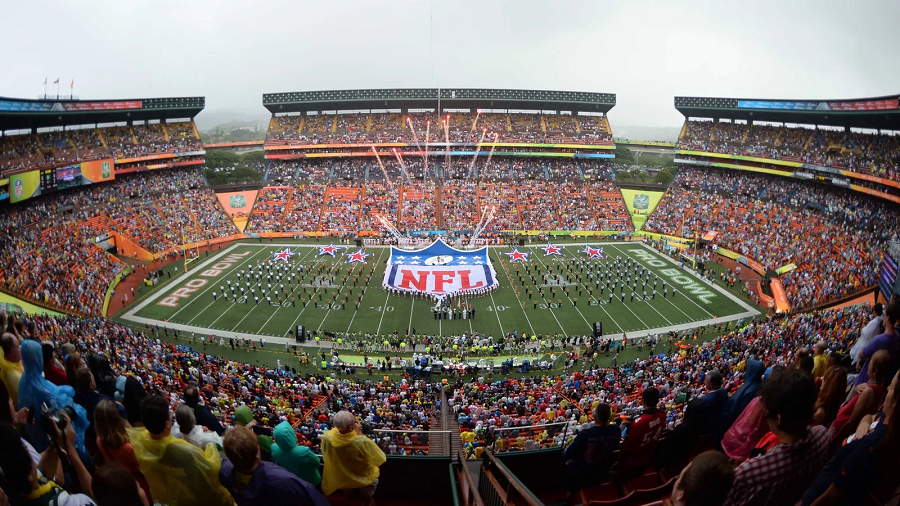 This is the third straight year the NFL has used an “unconferenced” format for the Pro Bowl. After last season’s Pro Bowl affair was played in Glendale, Arizona, the Pro Bowl is returning to Aloha Stadium, where it was played every year from 1980 to 2009 and again from 2011 to ’13 and most recently in 2015. The game was played in Miami in 2010. The draft was held in an airplane hangar at Wheeler Army Airfield, located in the town of Wahiawa in the central plain of Oahu, the most populated of the Hawaiian Islands. Only ticketed military members were allowed to attend.Rice was the winning alumni captain in 2013, the first year the Pro Bowl used the current format. Irvin was the captain of the winning team in last year’s game. Oakland Raiders future Hall of Fame cornerback Charles Woodson will play in his final Pro Bowl contest. The 39-year-old is retiring after 18 seasons in the league and nine Pro Bowl selections.“It was about being my last time, but it was about my family and us being able to take this trip together,” Woodson said. “This will be my last time ever suiting up in an NFL uniform to actually go out there and run around as a player, so this is it. After this game, there’s no more. My NFL career is over. So we wanted to come out, enjoy Hawaii and then hopefully ride off into the sunset.”
Older post
Newer post