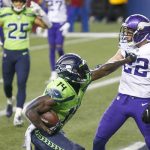 Two teams with playoff aspirations will meet on Sunday at US Bank Stadium in Minneapolis, Minnesota, as the 0-2 Minnesota Vikings will host the 1-1 Seattle Seahawks. Both of these teams have had explosive offensive performances early in the season. We’ll see who’s defense can step it up. With all that being said, it's time we get a closer look at both teams and how they arrive to this matchup so you can bet against their NFL odds. After starting the season out 0-2, things just don’t seem to be getting any better for the New York Jets. With losses to Carolina and New England, the Jets will now head to the Mile High City to take on the Denver Broncos at Empower Field. Denver has one of the top defenses in the league, and after Jets rookie quarterback Zach Wilson struggled with the Patriots defense, he’ll now have another tough one to deal with. Let’s take a look at both teams and see how they arrive to this Jets vs Broncos matchup so you can bet against their NFL odds.

The Broncos have had a nice start to their season. With victories over the New York Giants and the Jacksonville Jaguars, Denver has started the season off 2-0. Teddy Bridgewater has been a breath of fresh air for the Broncos. Bridgewater has thrown for 592 yards and four touchdowns on the season. Melvin Gordon has been a bright spot in the Broncos backfield. Courtland Sutton and Tim Patrick have been Denver’s top receivers, as Jerry Jeudy has missed significant time due to injury. Tight end Noah Fant is a star in the making, and he and Bridgewater have good chemistry between them.

On the defensive side of the ball, Denver has been downright nasty. They’ve only given up 26 points on the season. Von Miller has returned with a vengeance for the Broncos this season. He has three sacks on the season. Miller will get more help this weekend, as Bradley Chubb will make his first appearance of the season.

When Robert Saleh was hired to coach the Jets, many thought that he was the perfect man for the job. It’s too early to tell, but things haven’t gone well for the Jets thus far. In their season-opening loss to the Panthers, Wilson played well, throwing for 258 yards with two touchdowns and just one interception. Wilson had a game to forget against New England last week. The rookie threw four interceptions, wasting a great defensive effort by the Jets, as New England won 25-6.

New York is in rebuild mode, and things will be rough for the next year or two. The Jets are looking to build around Wilson, and they still need quite a few pieces. The AFC East is a very tough division with the Patriots, Miami Dolphins, and Buffalo Bills. We don’t see New York competing for the division crown any time soon.

Denver’s defense will give Wilson fits. If the Patriots were able to pressure him into some bad interceptions, the Broncos will be able to do the same. Denver’s offense has put up 50 points in their first two games. Teddy Bridgewater and company will be able to exploit a bad Jets defense. We see the Broncos winning this one easily, and covering the spread. Denver takes this one 28-10.

Posted: Thursday, September 23, 2021 4:48, EDT
After starting the season out 0-2, things just don’t seem to be getting any better for the New York Jets. With losses to Carolina and New England, the Jets will now head to the Mile High City to take on the Denver Broncos at Empower Field. Denver has one of the top defenses in the league, and after Jets rookie Read More

Posted: Thursday, September 16, 2021 4:04, EDT
For the first time in the 2021 NFL season, we will have rookie quarterbacks match up Sunday as No. 15 overall pick Mac Jones leads the Patriots against No. 2 overall pick Zach Wilson and the Jets. New England is a solid road favorite on the NFL odds. How to Bet Patriots at Jets NFL Odds & TV Info When: Read More

Posted: Sunday, September 12, 2021 11:48, EDT
New York Jets vs Carolina Panthers Score NFL Week 1 Result | NFL Betting Odds & Scores It wasn’t pretty, but the Panthers managed to get their first win of the 2021 season with a 19-14 victory over the Jets. Sam Darnold threw for 279 yards and a touchdown and ran for another score against his former team as Read More

Posted: Thursday, September 9, 2021 7:57, EDT
This past offseason, the New York Jets traded one-time franchise quarterback Sam Darnold to the Carolina Panthers for a couple of draft picks. Darnold now gets a chance to stick it to his former club as the Panthers are home NFL Betting favorites vs. the Jets in Week 1 on Sunday. NFL Betting Preview for New York Jets vs Carolina Read More

Posted: Wednesday, September 8, 2021 3:58, EDT
We are now just one day away from the official start of the 2021 NFL season, which is fantastic news for those of us who live and breathe football. Thursday night will see the Super Bowl champion Tampa Bay Buccaneers have a party that they hope will end with a win over the Dallas Cowboys. I would certainly bet on Read More

Posted: Monday, August 30, 2021 4:49, EDT
For over a decade now, there has been talk about potential international expansion within the NFL, with the UK, Canada, and Mexico touted as potential destinations for a new franchise. The trigger has yet to be pulled on any such deal and the logistics make it hard to imagine that it will ever happen. That said, the continuation of the Read More

Posted: Wednesday, August 25, 2021 4:20, EDT
The Philadelphia Eagles were interested in potentially drafting QB Zach Wilson this year, but the New York Jets took him at No. 2 overall. Now, the Eagles get to see what they might be missing as they visit the Jets to conclude the teams’ NFL preseason schedules on Friday. The Jets are favored on the NFL odds. How to Bet Read More

Posted: Friday, August 20, 2021 1:46, EDT
On Saturday, the New York Jets take on the Green Bay Packers in each teams’ second preseason match in a game where the Jets are favored because of who they’re likely to start. But the Packers may have no choice but to send 2020 NFL MVP Aaron Rodgers to the field. Will Rodgers and the Pack take down the Jets? Read More

With No. 3 first-round pick overall and a GM who isn’t afraid to trade down for the right deal, there's a lot of “wait and see” scenarios happening. Maccagnan also faces the fact that he doesn’t have a great draft track record, meaning his job may be on the line if he doesn’t do it right. Raiders could try to make a deal since they’re in need of a good QB and want to get ahead of the Giants No. 6 pick.

They do have a few needs, a good cornerback will serve the Jets well, they’re worse off now than they were at the end of the season. They’ll likely get the best pick they can in the draft at No. 3, defensive lineman, Quinnen Williams. We won’t know if the Jets trade down likely until the Cardinals and 49ers have done their picks.