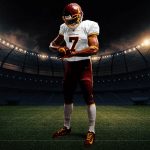 This coming Sunday will be the last Sunday without football until the Super Bowl is over. The National Football League is one of, if not the most popular sport in the world at this time. The NFL is also the sport that gets the most betting action. You can bet on many aspects of a football game. Some people like to just bet on games, while others will bet on anything that they can. With a salary cap in place, it is tough for teams to put together stellar offensive and defensive units at the same time. The more focus, and money, that they put into one often means that the other takes a bit of a hit. For many years, the Vikings thrived playing defensive football and getting by without having a killer offense. The tables have turned now, though, with the hope being that their defense can step up again this season after a poor showing in 2020. The expectation is that they will be better, but will the Vikings offense put up the big numbers that they did last season? Let’s take a closer look at the Minnesota Vikings offense heading into the 2021 season so you can get ready to bet against their NFL odds.

The Vikings Offense in 2020

There is always a lot of finger pointing to be done when a team finishes below .500 on the season. In the case of the 2020 Minnesota Vikings, those fingers were pointed very much in the direction of the defense, which surrendered 475 points. The offense, when talking in terms of yards per game, was top 5 in the league, so they certainly did their part to keep the Vikings in games that might otherwise have been a blowout.

The Vikings deliver 393.3 YPG last season, good for 4th in the league. We will get into how they accumulated those yards in a moment, but it is worth noting that their 26.9 PPG had them sitting just outside the top 10 in that category. The Vikings were middle of the pack in passing, delivering 250.6 YPG, but that is not so surprising when you have Dalvin Cook at running back. Minnesota was in the top 5 in rushing, generating 142.7 YPG on the ground.

If there was an issue with the offense in 2020, you would have to say it was the turnovers. They gave the ball away 23 times in the regular season, while the defense managed just 22 takeaways. They need to get into positive territory this season.

The Vikings Offensive Outlook in 2021

Another issue that the Vikings faces last season was sacks, but they addressed that in a big way by taking OT Christian Darrisaw in the first round of the NFL Draft. He will help shore up the O-Line and make it easier for Kirk Cousins to do what he does best. Cousins is going to have the usual cast of characters to work with, including Adam Thielen and Dalvin Cook, so I don’t see this defense letting up any at all. Most pundits seem to agree, as the general consensus is that the Vikings will have one of the top ranked offenses in the NFL again this season. They should be able to maintain a good balance between pass and run, which will keep opposing defenses on their toes.

As good as the offense is likely to be in Minnesota, they also need some help from the defense. While they put up a ton of yards last season, the offense was all too often forced to deal with poor field position due to the lack of production from the D. They should benefit from what will be an improved defensive unit in 2021.

Sports in the State of Minnesota