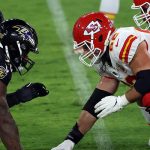 Two of the top five favorites to win the 2022 Super Bowl throw down on NFL Sunday Night Football when Lamar Jackson and the Baltimore Ravens host Patrick Mahomes and the Kansas City Chiefs. In NFL Week 1, KC rallied to beat the Browns while the Ravens fell to the Raiders. Which team will get it done on Sunday? Check out NFL odds, analysis, and a free pick for Chiefs vs Ravens.

NFL Teams that Look Like Super Bowl Contenders After Week 1

Posted: Monday, September 13, 2021 1:36, EDT
Football fans finally got their fix of NFL action. We have waited months for the NFL to return, and it returned in a big way. We saw lots of great action with some close games, along with some surprises along the way. The goal of every team is to win the Super Bowl. After watching the action in Week 1, Read More

NFL Betting Predictions: Will Tom Brady Retire If He Wins Another Ring?

Posted: Wednesday, September 1, 2021 7:03, EDT
When Tampa Bay takes on Dallas next Thursday, quarterback Tom Brady will start the quest to add to his record seven Super Bowl victories. If Brady secures another ring, will it be time for the greatest quarterback of all time to hang it up? Check out reasons Terrific Tom will retire after another Super Bowl win, reasons Brady won’t retire Read More

Four Bold Betting Predictions For Week 1 of the 2021 Season

Posted: Monday, August 23, 2021 9:00, EDT
We are almost all the way through the preseason in the NFL now, which means that Week 1 of the regular season is now just a couple of weeks away. We all now have a good idea of the likely Super Bowl challengers this season and of which teams might be in the cellar. That said, there is a history Read More

Posted: Tuesday, August 17, 2021 2:48, EDT
After the Tampa Bay Buccaneers battered them in the Super Bowl, the Kansas City Chiefs vowed to make improvements to their team. The Tampa Bay defense was in the Kansas City backfield numerous times throughout the game, forcing Patrick Mahomes out of his rhythm. In order to prevent that from happening again, the Chiefs made numerous upgrades to their offensive Read More