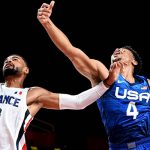 The Olympics Men’s Basketball tournament continues with the second round of play on Wednesday, July 28, with four matches featuring some of the strongest national basketball teams in the world. With a lot of basketball action to follow, also come betting opportunities, which we will explore in today’s Olympics Basketball betting article. From Olympic men’s basketball, soccer, and boxing, to which country will win the most medals, MyBookie has the sports betting odds for all the sports that Tokyo’s 2020 Summer Olympics has to offer.

The Olympics Men’s Basketball tournament continues with the second round of play on Wednesday, July 28, with four matches featuring some of the strongest national basketball teams in the world. With a lot of basketball action to follow, also come betting opportunities, which we will explore in today’s Olympics Basketball betting article.

Nigeria enter this match following a 67-84 loss against Australia, who handed them their second loss of the month after they’ve already beaten them 108-96 in a pre-Olympics friendly. Even though Nigeria struggled against the Aussies, they have done well earlier this month, beating Argentina (94-71) and the USA (90-87).

Germany enters this match as +144 underdogs, which seems fair. Nigeria might have lost their Olympics opener, but it was against the in-form Australia, who are one of the main favorites to secure a medal in Tokyo.

The USA are the main betting favorites to win gold at the 2020 Tokyo Olympics basketball tournament. That isn’t too shocking if you look at their roster; however, that doesn’t necessarily guarantee them success.

The USA enter this match following a heavy 76-83 loss against France, who defeated them in the opening round. That, however, wasn’t the first time Gregg Popovich’s men underperformed.

The points spread for this match is set at 38.5 points, which may seem fair; however, with the form the USA have been showing, you could consider a smaller wager on the outsiders. Iran have yet to defeat a team as strong as the USA, and we don’t expect that to change on Wednesday.

That said, it’s not entirely unlikely that the USA will want to preserve their strength for more important matches.

Australia are priced as the betting favorites here, which isn’t too shocking. They are in great form and have done well against teams considerably better than any squad Italy had to face recently. We like Australia with a -9.5 points handicap.

France’s victory against the USA looks very good on paper; however, if you consider the form the USA basketball team has been showing of late, Les Bleus’ success on Sunday becomes far less inspiring. That is not to say that France don’t deserve some recognition for winning, but it definitely doesn’t prove that they’re now in great form.