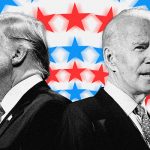 Both Joe Biden and Donald Trump made their final pitches to American citizens over the weekend. The odds continue to favor Trump, but The Donald pulled a rabbit from his hat in 2016. Will he do the same thing in 2020? Check out a final analysis of the presidential odds to win as well as some of the swing state electoral college odds. With the upcoming Election just around the corrner, MyBookie is in overdrive getting the public the chance to make some money on this modern-day live spectacle that is the Donald Trump Presidency, love him or hate him, you know he will be the top story of the day, and usually will make for some entertaining prop bets for us to have some fun with.

Both Joe Biden and Donald Trump made their final pitches to American citizens over the weekend. The odds continue to favor Trump, but The Donald pulled a rabbit from his hat in 2016. Will he do the same thing in 2020? Check out a final analysis of the presidential odds to win as well as some of the swing state electoral college odds. That being said, let’s get right to it so you can go ahead and place your bets against their U.S. Politics odds.

Biden has maintained a lead throughout, but Trump appears to be ready to take charge. For an underdog, Donald sure has commanded the attention of the electorate in the past three weeks. He’s been on a whirlwind tour, doing three rallies a day. In each one of his rallies, at least 20,000 people have shown up. Not only that, but some of Trump’s surrogates have ended up at Biden rallies to give Joe something to think about.

Yes, the polls still appear to favor Biden. But it’s hard to look past what’s happening on the ground. More importantly? The U.S. Presidential Election happens once every four years. So, if we can jump on a dog at above even money, it makes sense to go for it.

The Republican candidate, that’s The Donald, continues to offer overlay odds. At even money, Trump is a great bet to take AZ. He had 25,000 show up to a rally last week and VP Mike Pence was in Arizona on Friday to continue to spread the word.

Even though Barrack Obama showed up last week to bolster Biden’s chances in Florida, the Sunshine State has begun to move towards the Repubs. It’s tough laying -190 on a state that many polls consider within 1 to 2 points in favor of Trump, but the Republican candidate did a great job shoring up his base in Florida.

Trump’s final rally on Sunday is in North Carolina. People showed up early to get a glimpse of their fuhrer, uh, we mean Donald Trump. In any case, Trump and the Repubs look to have NC as well.

Tough, tough call in Pennsylvania. Joe Biden, though, said he’d phase out the oil industry. That’s the death knell for him. Trump wins another swing state.

We can’t look past the +195 on The Donald. He took Wisconsin by a whisker against Hillary Clinton in 2016. So, even if the Orange One loses, we’re okay knowing we made the right wager in a swing state that’s much closer than the -290 on Sleepy Joe implies.

Posted: Monday, November 2, 2020 12:44, EST
Both Joe Biden and Donald Trump made their final pitches to American citizens over the weekend. The odds continue to favor Trump, but The Donald pulled a rabbit from his hat in 2016. Will he do the same thing in 2020? Check out a final analysis of the presidential odds to win as well as some of the swing state Read More

Posted: Wednesday, October 28, 2020 10:55, EDT
We’ve gone over all of the prop wagers and have made picks for the electoral college in the toughest to handicap states. The only thing we must do now is choose which candidate, Republican “Don’t Call Me Orangutan” Trump, or Joe “Wind Energy Rocks” Biden. Let’s get to it so you can keep on making your bets against their U.S. Read More

Posted: Wednesday, October 21, 2020 1:37, EDT
The U.S. Presidential Election is almost here! Every week, we’ve analyzed and made U.S. political picks. Because we’re so close to the election, this week we’re talking the Electoral College. The United State’s chooses its president based on how the electoral college votes. Even if the candidate loses the popular vote, like Donald Trump in 2016, the candidate can still Read More

Posted: Wednesday, October 14, 2020 11:31, EDT
Things are heating up! Both Joe Biden and Donald Trump have hit the campaign trail. For a moment, it appeared as if Trump might not get back out on the trail due to his coronavirus positive. But the 74-year-old current President showed no signs in a rally in Florida. Check out an update of U.S. Presidential Election props with analysis Read More

Posted: Wednesday, September 30, 2020 4:49, EDT
We’re four weeks away until one of the most contentious elections in U.S. history. In our weekly Political News piece, we’re going to analyze and make picks for Donald Trump Props. Next, week will pull out different props and analyze those. Check out prop picks for the U.S.’s current president so you can make your bets against his U.S. Politics Read More

Posted: Wednesday, September 23, 2020 6:36, EDT
Next Tuesday, on Sep. 29, Orange Mussolini, the venerable Donald Trump, battles everyone’s favorite Snow White character, Sleepy Joe Biden, in the first of three awesome debate matches. What will come out The Don’s and Hidin’ Biden’s talking heads? Let’s have a closer look at what this two candidates may say on the debates so you can bet against their Read More

Posted: Wednesday, September 16, 2020 1:52, EDT
Presidential politics is heating up! Not only can political handicappers decide on which man, Joe Biden or Donald Trump, wins the U.S. Presidency on Nov. 3, but they can also wager on numerous prop bets. Check out a run down of some of the top prop wagers surrounding the 2020 U.S. Presidential Election so you can place your bets against Read More