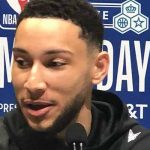 Believe it or not, NBA teams start reporting to training camp already next week with the regular season about a month away. However, one All-Star who will not report to camp with his current team is Philadelphia’s Ben Simmons. This was rumored all summer but it’s now official that Simmons is 100 percent done with the Sixers and is willing to accept any fines, etc. What a difference a day makes!

On Tuesday, the Clippers were coming off of a big victory over the Utah Jazz to even the series at two games apiece. The Phoenix Suns were waiting in the wings for the winner of the Utah-Los Angeles series, coming off of a sweep over Denver. On Wednesday morning, it was announced that Kawhi Leonard could be out for the rest of the playoffs with ACL issues. And if that wasn’t enough bad news for the Western Conference, Chris Paul was put in the league’s COVID protocol, and it’s unknown how much time he may miss.

This news changed the odds for the Western Conference title. In the Eastern Conference, Brooklyn’s big Game 5 win over the Bucks to take a 3-2 lead further solidified their status as the favorite to win the East. Let’s take a look at the odds of winning both conferences so you can continue betting against their NBA Conference Championship odds.

Even though Kyrie Irving is out for the rest of the series with Milwaukee, the Nets are still the favorites. With James Harden coming back from his injury and Kevin Durant playing like a man possessed, the Nets look like the team to beat in the East.

The Sixers blew a 26-point lead and lost to the Hawks at home to go down 3-2 in their series with Atlanta. They go to Atlanta for Game 6 with their season on the line. We’ll see if Joel Embiid and crew can bounce back from their huge collapse.

Giannis Antetokounmpo disappeared at the end of Game 5 against the Nets. We’ll see if he can step things up or if he’s just a stellar regular season player. Could we see Giannis on Kevin Durant in Game 6?

After their huge comeback win over the Sixers, the Hawks’ odds changed dramatically. Trae Young is playing at an elite level and is carrying the Hawks. Can he carry them all the way to an Eastern Conference title?

Now that Kawhi Leonard could be out for the rest of the playoffs, the Jazz look like a better bet to win the West. Donovan Mitchell is playing well, and Mitchell, along with Jordan Clarkson, is putting up huge numbers. We’ll see if the Jazz can take advantage of the undermanned Clippers.

After their Game 4 win, it looked like the Clippers had a lot of momentum heading into Game 5. Then the Kawhi Leonard news came out, and things changed for the worse. It will now be time to see if Paul George is worth the max deal that he signed earlier this season.

Posted: Thursday, June 17, 2021 12:54, EDT
What a difference a day makes! On Tuesday, the Clippers were coming off of a big victory over the Utah Jazz to even the series at two games apiece. The Phoenix Suns were waiting in the wings for the winner of the Utah-Los Angeles series, coming off of a sweep over Denver. On Wednesday morning, it was announced that Kawhi Read More

Posted: Thursday, June 10, 2021 9:24, EDT
Without All-Star point guard Mike Conley, the Utah Jazz were still able to rally past the Los Angeles Clippers in Game 1 of their Western Conference playoff series. It’s not likely that Conley will play in Game 2, either, but the Jazz are favored again on the NBA odds. How to Bet Clippers at Jazz NBA Odds & TV Info Read More

Posted: Tuesday, June 8, 2021 9:47, EDT
The last NBA conference semifinal series to start in the 2021 playoffs is the Los Angeles Clippers visiting the team with the league’s best record in the Utah Jazz on Tuesday. The Jazz are favored on the NBA odds to win the Western Conference and also in Game 1 vs. L.A. How to Bet Clippers at Jazz NBA Odds & Read More

Posted: Wednesday, June 2, 2021 11:59, EDT
At the start of the playoffs, 16 teams are all in and competing. And now, fans of the Heat and Celtics, who battled in the conference finals last year, are dealing with an earlier summer. Still, so many great options remain. Also, the Lakers are one loss from being punched out in round one, following their championship victory a season Read More

Posted: Monday, May 31, 2021 10:04, EDT
The Utah Jazz lost Game 1 of their Western Conference playoff series vs. the Memphis Grizzlies when they were without All-Star leading scorer Donovan Mitchell. However, the Jazz have won both games since Mitchell returned and are favored on the NBA odds for Game 4 Monday. How to Bet Jazz at Grizzlies NBA Odds & TV Info When: Monday, 9:30 Read More

Posted: Wednesday, May 26, 2021 11:23, EDT
The Utah Jazz had the best record in the NBA during the regular season, but without All-Star and leading scorer Donovan Mitchell were stunned at home in Game 1 of their Western Conference playoff series vs. No. 8 Memphis. However, Mitchell will play in Game 2 on Wednesday and the Jazz are solid betting favorites. How to Bet Grizzlies at Read More

Posted: Wednesday, May 12, 2021 10:35, EDT
The Portland Trail Blazers are battling to stay out of the Western Conference play-in tournament, while the Utah Jazz are trying to finish as the conference’s top seed. The teams close their regular-season series on Wednesday night from Salt Lake City with the NBA odds dependent on Utah’s Donovan Mitchell and Mike Conley and whether they return from injury. How Read More

Posted: Monday, May 10, 2021 11:28, EDT
The NBA playoffs are right around the corner, and it’s very possible that the Utah Jazz and Golden State Warriors meet in Round 1 of the Western Conference’s postseason. The teams conclude their regular-season series on Monday from San Francisco with the Jazz favored on the NBA odds. How to Bet Jazz at Warriors NBA Odds & TV Info When: Read More

Posted: Wednesday, May 5, 2021 10:13, EDT
It’s a potential Western Conference first-round playoff preview when the Utah Jazz host the San Antonio Spurs for the second game in a row on Wednesday. The Jazz rather easily won the first Monday and will be big favorites again on the NBA odds. It’s the lone national TV game of the night. How to Bet Spurs at Jazz NBA Read More