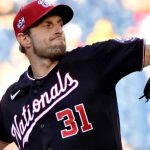 The Major League Baseball Trade Deadline is Friday, and there are a lot of big names being bandied about – but none bigger than Washington Nationals three-time Cy Young winner Max Scherzer, a lock first-ballot future Hall of Famer. The Nationals are going nowhere this season and Scherzer is a pending free agent so he could be dealt, and if so would certainly shake up the 2021 World Series odds. While the Yankees’ biggest rivals are the Boston Red Sox, arguably the current team that the Yankees hate the most is the Tampa Bay Rays as there always seems to be bad blood/guys hit by pitches when they play. The do open a series in Florida on Tuesday with the Rays favored on the MLB odds.

How to Bet Yankees at Rays MLB Odds & TV Info

The Yankees enter off quite a loss Sunday in Boston as pitcher Domingo German carried a no-hitter into the eighth inning and New York led 4-0 … and was beaten 5-4 in a crusher. Afterwards, Manager Aaron Boone acknowledged some moves were right to be second-guessed.

“That’s a fair question,’’ Boone said. “This definitely seems like, over the last month [or] month and a half, we’ve had tough ones to get past. Time and again, these guys have done it. Look, it’s been a difficult season to this point. No question about it.”

New York did get back third baseman Gio Urshela from the COVID list over the weekend – he is slashing .275/.318/.440 with 11 home runs, 39 RBI, 30 runs scored and a stolen base through 318 plate appearances — and could get back star outfielder Aaron Judge from that list for this game. Judge will need to clear a standard cardiac workup Monday in order to gain full clearance. The 29-year-old has yet to play during the second half since testing positive for the virus during the All-Star break. First baseman Luke Voit remains out with left knee inflammation and Boone was unsure whether he’d be back this week.

“I know Luke’s doing really well,’’ Boone said. “I know [Saturday] he was running and felt as good as he’s felt in a long time. We’re encouraged [by] where he’s at. Hopefully it’s not too much longer as he gets ramped up.”

It’s lefty Jordan Montgomery (3-5) on the mound. Montgomery reeled off 5 2/3 scoreless innings last Thursday in a no-decision against the Red Sox. Montgomery scattered three hits and one walk over 5 2/3 frames at Fenway Park. He also finished with six strikeouts. The 28-year-old owns a 3.96 ERA, 1.18 WHIP and 105/31 K/BB ratio across 104 2/3 innings (19 starts) overall this season.

Montgomery is 2-1 with a 3.86 ERA this year in four starts vs. the White Sox. Yankees starters have posted a 2.21 ERA in their last 16 starts and have allowed 2ER-or-fewer in 13 of those starts.

Why Bet on Tampa Bay?

The Rays had a five-game winning streak snapped Sunday in a 3-2 loss in Cleveland but they are still right on the heels of the first-place Red Sox in the AL East Division.

Tampa made a huge trade last week in acquiring All-Star DH Nelson Cruz from the Twins and Cruz hit a solo homer in Sunday’s loss. He put the Rays ahead briefly with a 406-foot line-drive to straightaway center field — his 21st round-tripper of the season — off righty Triston McKenzie in the sixth inning. The 41-year-old has already gone deep twice in three games since being dealt to the Rays earlier this week. He’s hitting .289/.367/.542 with 47 runs scored, 21 homers, 52 RBI and three steals across 360 plate appearances overall this season.

Star reliever Nick Anderson pitched one inning Monday in his second rehab appearance for the Rays’ rookie-level Florida Complex League affiliate. Sidelined since late in spring training with a partial ligament tear in his right elbow, Anderson made his 2021 debut in affiliated ball Friday. Anderson looks to be trending toward an early August return from the 60-day injured list. Last regular season, he was amazing with a 0.55 ERA and 0.49 WHIP over 16.1 innings.

It’s lefty Shane McClanahan on the mound for Tampa. McClanahan (4-3, 3.88) allowed one run on four hits over five innings in last Tuesday’s win over the Orioles. McClanahan fanned seven while walking just one. Outside of an RBI single by Pedro Severino in the second inning, the 24-year-old got the job done. McClanahan recorded a career-best 22 swings-and-misses, surpassing his previous high of 17 which he did twice, most recently June 20 at Seattle.

McClanahan faced the Yankees on June 2 in the Bronx (L, 3.1-IP, 4-ER) and twice out of the bullpen in last season’s Division Series.